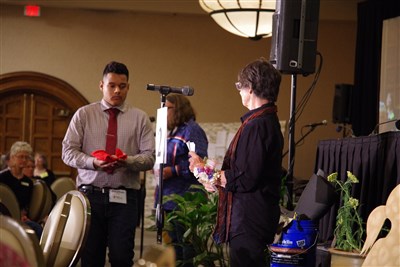 With one small rock, a monumental moment was honored at the Oregon-Idaho Annual Conference gathering, when it was noted 1.5 acres of land at Wallowa Lake Camp will soon be returned to its rightful owners – the Nez Perce Tribe.

During a ceremony on Friday a rock from Wallowa Lake Camp was symbolically passed to representatives from the Nez Perce Tribe to honor and represent the vote taken on Thursday to return a parcel of land, river bottom land detached from the camp, that is ideal Sockeye Salmon spawning habitat.

“This sacred act was encouraged by the work done at the 2012 General Conference through the Act of Repentance with Native peoples,” said Camping and Retreat Ministries Executive Director Todd Bartlett. “This is also in line with two previous actions of the Oregon-Idaho annual conference: 1986 and 2007 when we returned land to the Klamath tribes.”

The rock offered to the Nez Perce representatives on Friday will be returned to the land when the Conference and the Tribe formalize this transfer and return of the land at Wallowa Lake on Aug. 1.

“We have one spirit and I felt it when we came here,” said Elizabeth Arthur-Attao, treasurer of the Nez Perce Tribal Executive Committee. “Our Lord is here and so are our ancestors. They are smiling down on us today.”

Bartlett said Oregon-Idaho United Methodists’ relationship with the Nimi’ipuu (Nez Perce) homeland began in 1922 with the first event at Wallowa Lake followed by the purchase of the property in 1923.

As the years have passed the Conference’s relationship with the Nez Perce has evolved as it was fostered by persons who served as pastors in the Joseph, Elgin and Enterprise UMCs, as well as staff at the Wallowa Lake Camp. The Nez Perce Tribe based in Lapwai, Idaho, has held two culture camps each summer for elementary and high school aged children since 2000.  This annual interaction has gifted both the tribe and ourselves with learning and understanding.  Because of this the relationship has deepened and, in the summer of 2016, a meaningful step was taken when the Nez Perce flag began being flown alongside the US flag at camp.