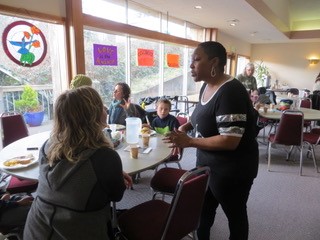 After a racial slur had been spray-painted across a local skate park and bigoted remarks targeted a mayoral candidate a year ago, one local resident knew something needed to change in the small coastal town of Nehalem, Ore.

LaNicia Williams knew a conversation needed to happen, but she needed the help of someone in Nehalem and somewhere to make that happen. That someone ended up being the Rev. Steve Wolff and that somewhere became Nehalem Bay United Methodist Church.

“All I did was say, ‘Hey! Here’s what we’re doing. Would you be willing to open the church doors?’ We’re trying to break down barriers,” Williams remembers in her initial conversation with Wolff. “We have so much rage in front of us right now.”

Williams, one of the only black women in the community, founded the Love Coalition. With the help of members of Nehalem Bay UMC, last year they organized the first-ever “Power of Love” event during Martin Luther King Jr. weekend. The event featured a brunch and table discussions.

“We saw an impact immediately with the simple act of having a conversation,” she said. “I have been able to have conversations with people who have never engaged with a person of color before.”

It was so successful, the Love Coalition and Nehalem Bay UMC are expanding it this year to include a movie screening and a day of volunteering with organizations such as Habitat for Humanity in the local community during Martin Luther King Jr. weekend, Jan. 13-15, 2018.

“For some people (in our congregation) this is kind of refreshing,” Wolff said.

Wolff said the population of the area has changed as more retirees flock to the coast as well as other people looking for jobs. This has brought more diversity to the community and, as evidenced by last fall’s activities, hasn’t be easily embraced. These changes to the Nehalem bay area, coupled with race relations intensifying at the state and national level, meant action had to be taken.

“We just needed a place for everyone to come together,” Wolff said. “This church has a history of conversations – calling people together. We have to be willing to talk to other people and create the opportunity to have conversations.”

Wolff said he’s seen the Love Coalition bring a new sense of vitality to his congregation and has brought some new faces to the church. Williams said she’s seen God working in the people of Nehalem Bay, opening their eyes, if not their hearts.

“We can’t take people’s truths away from them,” she said. “For me, I know that only God can change hearts.”

Neither Wolff nor Williams said this was a difficult undertaking on the part of either of their organizations. Nehalem still has a long way to go – as does the rest of the world – but they appear to at least be headed down the same road now. If it can happen here, the dialogue can change in other communities, Williams said.