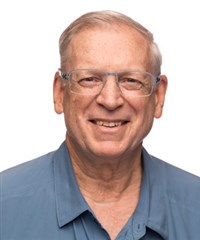 When news that Clarkes-Mulino UMC’s Rev. Tom Truby passed away this week after a prolonged illness, church members knew exactly what to do – even though it means they can’t gather in person right now to honor the life and legacy of Rev. Truby.

Due to COVID-19 concerns about large group gatherings, the church knows its impossible to hold a memorial service in the space right now. But it’s not impossible to honor Truby, who served Clarkes-Mulino since 2007 and continued to do so this last year as a retired elder.

The church normally puts its resurrection cross outside of the church on Easter morning. But this week, decided to put it out early, and wrap it with chicken wire. Congregants have been encouraged to come by and place flowers and send photos of the cross wrapped in flowers to Truby’s widow, Rev. Laura Truby.

“A lot of it is carried on in the spirit of Tom’s teaching,” said Rick Millsap, church board chairman. “It’s a very close community.”

Truby hasn’t been able to be with his church since Christmas and Millsap said they have done their best to continue to hold worship services until recently, with different congregants taking turns in the pulpit. They average 40 people in attendance on Sundays. It’s difficult not to be able to get together right now, but Millsap said everyone is during their best.

People can visit the church, located at 18773 S Windy City Rd, Mulino, OR and send their photo of them with the cross to Rev. Laura Truby at lauratruby@comcast.net. Condolences may also be sent to her at 14221 Livesay Rd, Oregon City, OR 97045