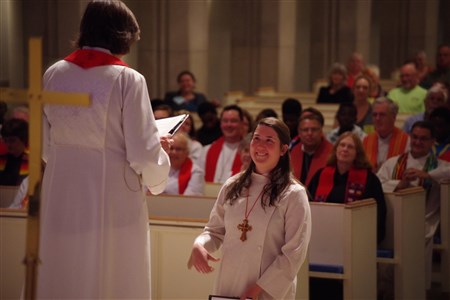 The emotions of what she was about to embark on hit Jessie Cummins a whole 24 hours before she was commissioned as a provisional elder of the Oregon-Idaho Conference.

On Wednesday night, she was sitting in the sanctuary at Cathedral of the Rockies in Boise with Bishop Elaine Stanovsky, rehearsing the words she would utter the next night that would set her on this journey in ministry. Just an hour before this, she witnessed 17 candles being lit to honor the memory of 17 good and faithful servants in the Conference.

“I said to the Bishop, ‘I feel very overwhelmed,’” Cummins recalls. “She said, ‘Good. You should. Because at the end of your life, someone is going to light a candle honoring you.’”

Thursday night, in front of family, clergy and lay members and faithful friends, Cummins embarked on a journey which is bringing her home to the place where her call into ordained ministry was nurtured and eventually blossomed.

She started attending church with her family as a preteen in Salem First UMC.

“It saw me through my formative years,” Cummins said

She attended Suttle Lake Camp as a youth and eventually worked on staff there. Then, as an undergraduate student at the University of Oregon, she got involved in supporting youth ministry at Eugene First UMC. It was there that the nudge turned into the call to head to seminary. She’ll begin serving as an associate pastor at Eugene First UMC on July 1.

The Oregon-Idaho Conference Board of Ordained Ministry (BOM) also believe she has the capacity after going through a rigorous discernment and interview process to be recommended as a candidate.

She had to meet with her district committee on ordained ministry, attend seminary, complete mountains of paperwork and come before the Conference Board of Ordained Ministry for a three-day interview process, according to Rev. Clay Andrew, chair of the BOM.

“It’s a lengthy and involved process,” he said.

He said it’s great to see someone who grew up in this Conference return here to serve. 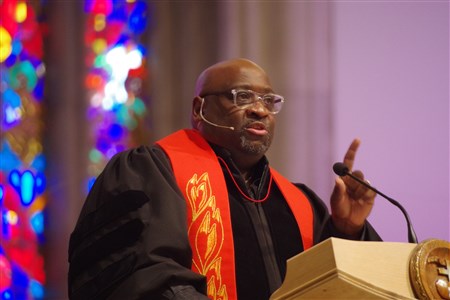 In addition to Cummins' commissioning, Rev. Leroy Barber, director of congregational development and vitality for the Oregon-Idaho Conference preached on the story of the Good Samaritan in the gospel.

Barber, who is a member of the Greater Northwest Episcopal Area Innovation and Vitality team, said there is more to the Good Samaritan story than simply helping someone out who is in need.

Being a good neighbor means getting outside one’s comfort zone. Jesus, Barber said, is calling us to disrupt the privilege.

“Jesus takes a familiar setting and he flips the story. He disrupts the order,” Barber said. “It’s like he didn’t read the Book of Discipline.”

We shouldn’t just be helping the Good Samaritan, Barber said. He agreed with Martin Luther King Jr. who once said we should make the road to Jericho a better one for all of God’s disciples, by lifting the voices of the marginalized and putting a stop to injustices.

He then looked to Cummins.

“May you go out and disrupt this world, sister, in the name of Jesus.”