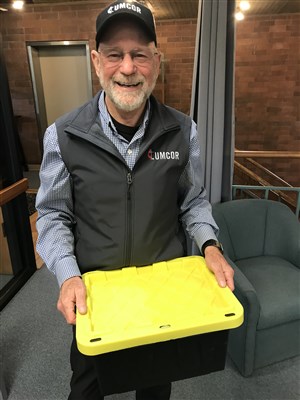 Larry Johnson headed out the door on Wednesday of the Oregon-Idaho Conference Center in order to get to Pendleton, Oregon, by the late afternoon to assist with flood relief.

“This would be the first time I know of, that we’ve responded in Oregon,” said Johnson, who is the Conference’s Emergency Response Teams coordinator.

He plans to be in Pendleton for a Multi-Agency Resource Center (MARC) gathering on Thursday to aid those who had to evacuate their homes due to flooding or suffered significant damage to their properties. He’ll be joined by the Oregon-Idaho Conference United Methodist Volunteers in Mission (UMVIM) coordinator Louise Kienzle, who happens to live in the area.

The flooding in eastern part of the state prompted the Oregon Voluntary Organizations Active in Disaster to put out a call. The American Red Cross, along with the Salvation Army, have responded.

Johnson is in the process of applying for an UMCOR solidarity grant, which would provide $10,000 to support flood survivors as well as buy supplies for ERT teams.

Already he’s connected with the UMCOR West Depot in Salt Lake City, which has sent two pallets of flood bucket kits to the Hermiston-Pendleton UMC, via one of the Pendleton parishioners who has warehouse space at their local business to store the flood relief buckets.

“It is amazing that it works this well,” Johnson said.

At the MARC, Johnson will be notifying Pendleton of the resources the ERT can provide and will assess the need for ERTs from around the Conference to come and assist with restoration and relief efforts.

Johnson has also been in contact with Great Spirit Native American Fellowship in Portland and Rev. Allen Buck, who are interested in supporting the Confederated Tribes of the Umatilla Indian Reservation, which has also been devastated by flooding.

Over the years the Conference has sent ERTs to other parts of the country – and world – to respond to natural disasters. Johnson said it’s a humbling experience to be responding in your own communities to such problems.