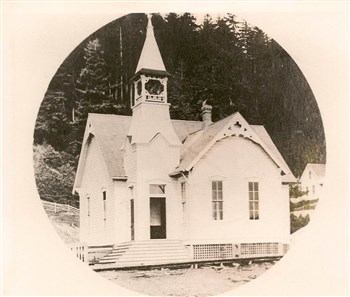 For more than 150 years the people of Covenant United Methodist Church in Reedsport have understood what it means to survive and thrive.
According to longtime member Leo Naapi, Methodist Missionary Jason Lee made his first trip to the mouth of the Umpqua River and this patch of land touching the southeast corner of Oregon in 1838 and it wasn’t easy.

“Jason Lee must have really liked the scenery,” said Naapi, who helped gather the church history. “He had to have a rowboat to get to the mouth of the Umpqua. Circuit riders also had no trails.”

After years of circuit riders, meeting in houses, building churches only to see them destroyed by fire and storms, serving community meals and watching as job after job left their community and the church shrinking smaller than ever, the people of Covenant UMC decided they could no longer thrive if they were just trying to survive with 10 members.

“We tried a lot of things,” said Leo Naapi. “My wife and I liked the Methodist requirement of accepting Jesus as our Savior.”

He and Myrna Naapi have called the church home for 44 of their 62 years of marriage.

Covenant UMC actually began just across the river from Reedsport (still a developing little town) in Gardiner. Jonathan Tibbetts was the first circuit rider to serve the Gardiner area starting around 1870.

“They’d hold worship services wherever they could,” Leo Naapi said.

In 1963, a croup of Methodist construction workers came to build the paper mill in Reedsport and bought the property and broke ground in 1966 for a church in Reedsport. Gardiner Methodist became Covenant United Methodist.

Leo and Myrna Naapi started attending church there in 1974. They were good friends with Paul and Beth Hurlocker, who helped secure the land to start Loon Lake Camp, which was operational until the mid 1990s.

Just as the Naapi’s started getting involved in the church, the International Paper employees who had helped build the church were moving on and moving south. The church lost a good chunk of its membership.

Reedsport is a blue-collar town with a number of manufacturing jobs that mostly went away over the years, and Naapi said so went the town.
In 1977 discussions about closing the church began, but Naapi said they kept going.

“We were a close-knit group,” Naapi said. “We started to call ourselves the survivors.” 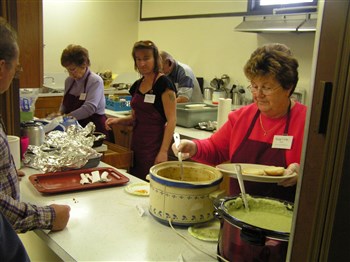 Myrna was head of the UMW for all but two of the years she’s called Covenant UMC home. She also served as the choir director and worship coordinator for a number of years as well. She was especially proud of the “Soups On” program that lasted for a number of years.
It started out being a weekly meal for people in need, but they found a lot of senior citizens in their community started attending as a way to socialize.

“It was like a high school cafeteria; so much talking,” she said.

While the church has closed its doors, the dozen final attendees are still part of the Reedsport community and can be seen in other area churches, still accepting Jesus as their Savior, and still connecting with the community.