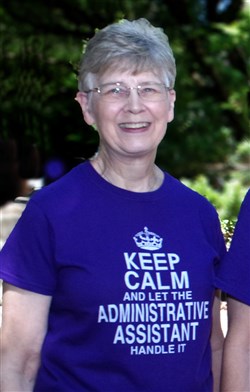 When Kay Burdick stepped into her position as administrative assistant for the Crater Lake District of the Oregon-Idaho Conference several years ago, she was hoping for a less stressful job.

She had been working in a local attorney’s office and she was looking for a new environment. Note that she didn’t say working on behalf of the 43 churches that make up the Crater Lake District was less challenging than her previous job.

“It’s a whole different atmosphere working together in this office for a common goal,” Burdick said.

At the end of December, Burdick will retire with 17 years of experience, having worked with four different district superintendents in that time.

“The most enjoyable part (of the job) has been working with the people,” Burdick said. “(The District Superintendents) have all been wonderful to work with.”

Current Crater Lake District Superintendent John Tucker said Burdick has been “fantastic” to work with for the last year-and-a-half that he’s held the position. Her patience being the most fantastic thing about her, he said.

“She knows things about the job that nobody else does,” Tucker said. “She has been patient and very responsive when I’ve had to ask the same question over and over again.”

Burdick was raised in United Methodist Churches across Montana, where her dad was a preacher and district superintendent in what is now known as the Yellowstone Conference. In 1979 Burdick and her husband Ken settled in at Trinity United Methodist Church in Eugene, where she served as choir director for many years.

“It’s been a real blessing to work with my co-workers,” Burdick said. “(The retreat) was a really fun time to kick back and relax.”

There’s more kicking back and relaxing in her near future.

Burdick said after the death of her husband Ken a year ago, she’s looking forward to spending more time with friends and family. She has two daughters and one grandson. She doesn’t have any grand retirement plans – yet.

Tucker said Sheri Konowitz has been hired as the new administrative assistant for the Crater Lake District and will begin transitioning into this position soon, training alongside Burdick before she takes over. Tucker is quick to acknowledge, though, there is more to Burdick’s legacy than her work.