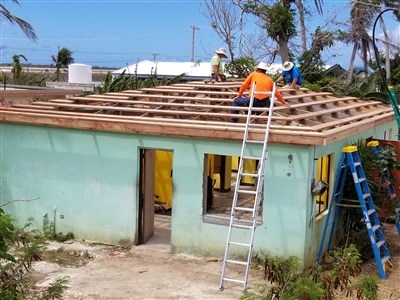 It takes more than 20 hours to fly there, but the people of Saipan are in desperate need of trained volunteer emergency responders to help them as they struggle to rebuild after Typhoon Yutu ripped through the area last fall.

Larry Johnson, a member of the Oregon-Idaho Conference Emergency Response Team (ERT), recently returned from a two-week work trip there. As a commonwealth of the United States, the Federal Emergency Management Association (FEMA) is looking for volunteer organizations specializing in repairs to help with the ongoing recovery efforts.

“I’ve been on multiple ERT deployments. This was an opportunity to go and do something very different,” Johnson said.

Normally ERT volunteers are mucking out houses or helping homeowners to prevent additional damage from happening to their property.

But as Typhoon Yutu ripped through the small island over a two-day period it did damage to more than 6,000 homes, with 1,400 completely destroyed. According to information Johnson’s team was provided, more than 34% of the dwellings on the island, with a population of 42,000, were damaged.

“There are people still living in tents on their property,” he said.

ERT teams are a division of the United Methodist Committee on Relief and FEMA is partnering with them and other faith-based organizations to fly experienced volunteers and repair teams to Saipan. Johnson said his team had their flights, meals and lodging paid for because the need for repair work is so great. 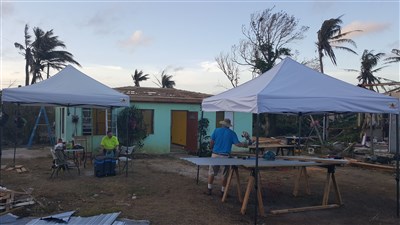 Johnson said the U.S. military was some of the first to respond and have helped provide tents, not just for homeowners, but for schools so that students can continue to get their education while the repairs are ongoing.

He said he worked alongside volunteers from Mennonite, Baptist and Adventist volunteer agencies to work on houses, primarily replacing a roof on one home.

FEMA is currently looking for more volunteers and summer is a hard time to recruit, especially to the South Pacific, Johnson said.
“The farther you get away from a disaster, people start to lose track of it,” he said.

UMCOR is currently looking for ERT members willing to travel who:

For more information and application details contact: Judy Lewis, Cal-Pac Disaster Response Coordinator at DJKLewis@aol.com or 909-731-8248 and an application packet will be sent to you. Kathy Bryson at pnwumcert@gmail.com is an alternate contact.

Johnson said the local response to workers has been incredible. People provided meals at job sites and seemed overwhelmed by the idea people living 26 hours away by plane would come to their aid.

“You do feel the people graciously appreciate what you’re doing,” he said. “They were just thankful people were there to help them.”
comments powered by Disqus
Boldly Making Disciples of Jesus Christ - Vitalizing the Church - Transforming the World