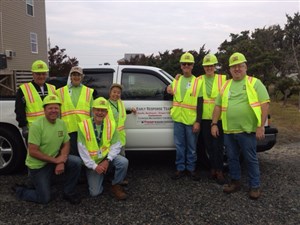 The Oregon-Idaho Conference, in partnership with the Pacific Northwest Conference, sent an Early Response Team (ERT) to North Carolina for seven days in early November 2016 to responed to the flooding from Hurricane Matthew. Oregon-Idaho blessed this effort with 3 ERTs on the team, Jerry Iervolino (Lake Oswego), Dave Haueter (Pioneer, Coquille), and Larry Johnson (Mt Home – Sherwood).

Kathy Bryson, the team leader and a member from PNW, said, “Over the course of six days our team of eight Early Response team members from the PNW and Oregon-Idaho Conferences packed personal items, sanitized and stored furniture then removed molding walls and flooring from a Hatteras family home. We hauled tree debris that covered another family home.”  And sadly, the team left with much work undone. Even in a community used to hurricanes, flooding on the scale of Hurricane Matthew overwhelmed the local resources and, unfortunately, it is often the less well-off and the elderly who bear the brunt. Larry Johnson, a first time ERT member from the Oregon-Idaho Conference, reports that the site coordinator had another 200 families vetted for ERT work but no other ERT teams scheduled. 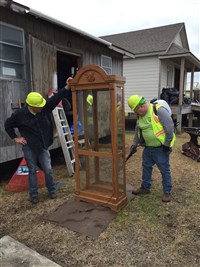 But, Bryson and Johnson both describe how working as an ERT is so much more than just cleaning up muck. ERTs bring hope and Christian love. Larry reported a noticeable sense of relief from elderly clients who knew their home and belongings were finally in good hands. Kathy describes how she and the team worshipped alongside families that shared their experiences of loss and hope for rebuilding. And both reported being humbled by the support the local citizens provided to the team, strangers who cared, from the other side of the country. The fire station provided housing and showers, church ladies provided dinners to a tired team, and strangers offered the loan of tools.

The team was travelling to North Carolina on the day of the election and Larry Johnson reflected on the result, its aftermath, and how it impacted the team’s work, “We were a team of people from one part of the country with our values and views, giving up their time to help a community of people with their own values and views. So how would this work out?  In the end, we were one group of people with some skills helping another group of people who had a need. Isn't that all Jesus asks us to do?”

In addition to providing willing and trained hands, Oregon-Idaho contributed $1500 to help defray the team’s expenses and Conference Disaster Response Coordinator, Dan Moseler, was able to secure two vehicles for the team’s use at the site at no cost to the team.