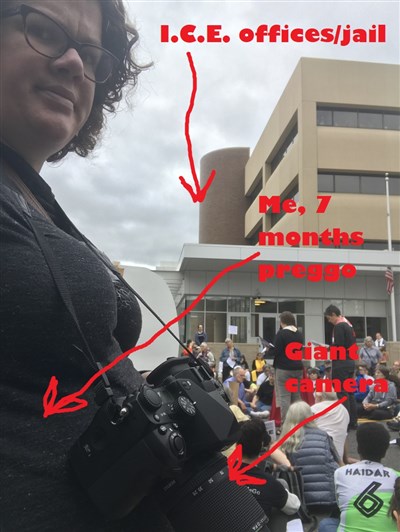 A year ago, I found myself sitting in a cell inside the Immigration and Customs Enforcement detention center in Portland with tears of laughter and fear streaming down my face.

I was seven-and-a-half months pregnant.

I was sitting in a jail cell because I was accidentally swept up in an arrest of peaceful protesters taking part in civil disobedience for the sake of immigrant families.

I wasn’t there to protest. I wasn’t there to make waves. I was simply there to take photos and tell the story of United Methodist clergy and laity who were protesting the continued detention of asylum seekers at the Sheridan Federal Correction Center.

But I ended up capturing a lot more than what was on my camera. Through my own lens, I caught a glimpse of humanity on all sides of the issue. Let me explain.

For a month, the Interfaith Movement for Immigrant Justice (IMIrJ) had been organizing protests and acts of civil disobedience outside of the ICE offices in Portland to garner the attention of regional directors to release asylum seekers who were being illegally detained in federal prisons. Throughout the month, faith leaders showed up at least once a week to stand in prayer, song, and meditation in front of the main gate at ICE and would wait until Department of Homeland Security officers or ICE agents asked them to move. When they politely refused, they were arrested, cited with misdemeanor federal crimes at the federal courthouse and released to appear at a future court date.

It was the end of August and IMIrJ had organized one last gathering. More than 200 people linked arms and walked from a nearby park to the street in front of ICE. They sang, they listened to stories, and they prayed. Slowly, 21 people of all faiths who had determined they were willing to risk their detention formed a circle in front of the ICE building. They prayed, offered individual reflections, took communion and sang while they waited for police to respond to them.

I saw tears form in the eyes of my colleague, Rev. Erin Martin, as she sang “Lord Prepare Me to be a Sanctuary.” I could see the passion and determination to seek justice for all of God’s children in Rev. Ron Warner, Jr.’s eyes as the Presbyterian minister was taken into custody.

They and 19 leaders of various leaders of faith were standing in a circle, definitely blocking the entrance to a federal facility.

I was standing – or I thought I was standing – on the sidewalk on the edge of the driveway, trying to capture this passion on my camera when I got a tap on my shoulder, felt a blue rubber-gloved hand gently grab my left elbow and a voice behind me said, “Let’s go, you’re under arrest.”

The blood drained from my body. “What?” I remember saying out loud as I obeyed the officer’s command and went with him through a gate and back toward a garage where DHS and ICE officers were holding other clergy members.

As I came around the corner, Martin’s eyes got big and I looked at her and said, “I didn’t mean to do this.”

While we were lined up against a wall, officers mingled in the garage for what felt like an eternity before they began coming down the row in one direction to collect our belongings,while officers came from the opposite direction to conduct pat-downs and handcuff us with zip ties.

Erin reached her hand over, patted my swollen belly, and said, “You’ll sure have a story to tell your little boy!”

There was a little bit of chuckling before one of the officers said, “Wait a minute. You’re pregnant?”

He gave me this look like I was nuts for being pregnant and voluntarily sacrificing myself for this cause. I told him, “Yes, I am. And no, I wasn’t an intentional participant.”

I laugh a lot when I tell people how I got accidentally arrested – how the officers had no idea what to do with the giant camera I had around my neck (when most people had come prepared with minimal belongings to get arrested). I also laugh because I was experiencing gestational diabetes during my pregnancy, which meant I had to check my blood sugar four times a day.  That meant I had a purse full of needles, which probably looked suspicious.

“Just so you know, there are a lot of needles in my purse. I’m not a drug user, I’ve just got gestational diabetes,” I said.

As we waited for the first group of detainees to be transported to the federal courthouse for processing, we began chatting up the DHS and ICE officers who were being nothing but respectful with us. We spoke about our families. We spoke about the threats they faced from the “Occupy ICE” movements and how one officer wore a mask to protect his identity because his family had been targeted during that aggressive and sometimes violent movement.

I used to be a reporter and I worked with law enforcement on a daily basis, so we swapped stories about some of the calls we’d been on and cases we’d seen. They also offered me a chair or other accommodations in case my pregnant self needed it.

I was in the second group of “protesters" that was awaiting transport to the federal courthouse for processing, but there was a delay in getting a second vehicle, so they ushered us into two holding cells – one female, one male – and we awaited transportation. Thankfully, there was a half-walled bathroom in the cell I shared with a few other women (again, still pregnant). 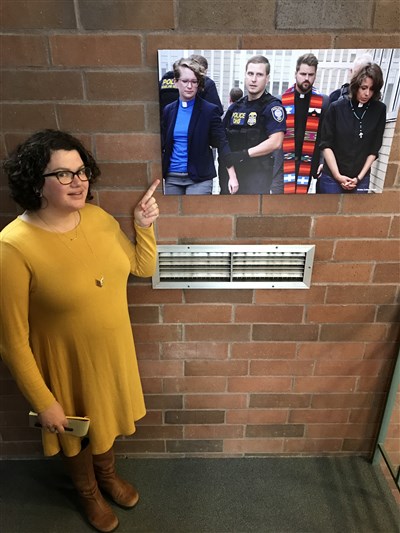 As I started to panic, for probably the billionth time, I kept trying to apologize to these women for my emotional outbursts. My husband was on a plane on his way across the country for a boys’ weekend with friends. My cell phone was dead. I didn’t know if anyone in the crowd who knew me saw me get arrested. Was I going to need bail money? The only phone number I had memorized was my dad’s in Montana.

One of the clergywomen gently explained to me that I was going through a traumatic event – I didn’t start my day intending to end up in jail – and that it was OK to feel all my feelings.

I think I was maybe in the holding cell 45 minutes (which felt like 4-5 hours) before they decided to cite the pregnant lady there at the jail and let her go.

One of the officers issued me two misdemeanor citations – blocking an entrance to a federal facility and disobeying a lawful order – and waited with me outside for my information to be processed (you know, in case I had any warrants) before letting me go.

The guy appeared to be about my age and had children. When I told him I was from Montana, he eagerly told me how much he loved Helena (my hometown) and how he wanted to go back there and do some more hiking.

“Well,” I said. “Under different circumstances I’d give you my email address and tell you to contact me for ideas on where to go on your next trip.”

We both laughed, awkwardly, and I was on my way out the gate and back to my car.

My emotions were all over the place for the next 48 hours. I laughed a lot, because of course something like this would happen to me. I felt foolish; I wasn’t one of the brave ones who stuck my neck out to get arrested, I just wasn’t paying attention to where I was standing. I felt humbled by the reality of the justice system I had spent a career earlier documenting from afar.

The charges, of course, were later dropped because I wasn’t an intentional participant in the event. And I’m told the initial officer who arrested me felt sheepish because he didn’t know that I was just there to pay attention.

In all of the emotions I’ve felt then and now, never once have I been angry. I mean, I caught a glimpse – a very small glimpse – of what it might be like for a person of color to be wrongly accused of a crime. I was treated with courtesy and respect by the officers who were detaining me, which I realize isn’t the same opportunity people of color are always afforded.

I still cry at stories of children being forced into the foster care system because they are removed from their parents’ care as they tried crossing the border to seek asylum from their countries of origin.

I have immense pride and gratitude for the people who stood up that day to the justice system and who supported me and made me feel included, even when I accidentally joined the club.

For a long time, I tried to find a reason for why God put me there. I told this story to one of my long-time spiritual mentors, retired Rev. David Orendorff (of the PNW Conference) and said, “I was just there to take photos and witness what would happen.”

“Maybe that’s the purpose,” he said.

I was a witness, all right; to justice, injustice, compassion, generosity, fear, misunderstandings, community and so much more. I was a witness to the humanity of God’s kin-dom and for that, I feel wrapped in grace.