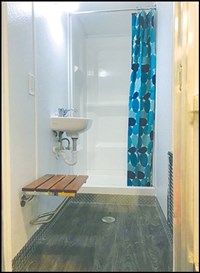 Finding lodging for Early Response Teams (ERT) and Volunteers in Mission (VIM) teams is always a challenge. The teams frequently find themselves sleeping on cots or air mattresses in a church, a school, or other facility with minimal amenities. The Conference ERT and VIM Coordinators in concert with the team leaders do their best to find lodging that is clean, climate controlled for the season, and provides adequate accommodations necessary to meet safe sanctuary requirements. Fortunately, our volunteers tend to be flexible and willing to deal with whatever is thrown at them.

The greatest challenge is finding facilities that have showers. Very few of our churches have them so we often have to find places like fitness centers, motels, or schools that will allow our teams to use their showers during their stay. We have often wished we had a shower trailer we could deploy with the teams and the Conference Disaster Team has looked at purchasing one but we always had expenses that were a higher priority or the cost was out of our reach.

This spring the Disaster Response (DRC) and ERT Coordinators for the Greater Northwest Episcopal Area developed a proposal for purchasing three shower trailers to be shared between the three Episcopal Area Conferences. We submitted the plan to UMCOR and requested a $100,000 grant to purchase the trailers. The rest is history. The grant was approved, we ordered the custom-made trailers and patiently waited for them to be assembled and delivered. Hurricanes Harvey and Irma slowed down the manufacturing process but the first two trailers were delivered to Central United Protestant Church in Richland on Friday, December 8. The third one is expected to be delivered on Thursday December 14.

The trailers have two or three individual shower stalls with sinks, hook-ups for washer and dryer and an on-demand hot water system. Two of them have winterization packages and air conditioning and the Alaska trailer has an Arctic package with additional insulation, special plumbing and a water supply system. All three of them are towable by a standard pickup truck. Once they are licensed and the signage is installed, one will be strategically stored on the east side of the mountains, one will be stored at Wesley Homes in Des Moines and the third one will be taken to Alaska. They will be deployed with teams as needed and can even be loaned to other Conferences or organizations that have a need when we are not using them.

We owe a great big Thank You to UMCOR and to the many donors who have helped make this dream come true.