Greater NW churches respond to GC2019 with messages of frustration, apology and love

Greater NW churches respond to GC2019 with messages of frustration, apology and love 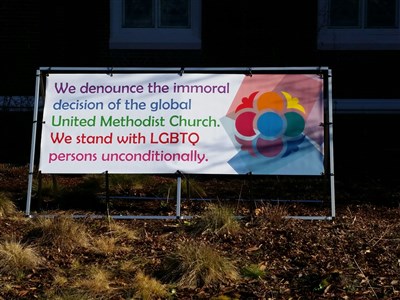 As soon as Rev. Barbara Nixon saw the votes tallied at General Conference that would ensure that The United Methodist Church would re-affirm and double-down on the unequal treatment of LGBTQ people within the church, she was on the phone ordering a banner for Corvallis First UMC.

The sign, which was posted in the church’s front yard later that evening, reads: “We denounce the immoral decision of the global United Methodist Church. We stand with LGBTQ persons unconditionally.”

Corvallis has been a reconciling congregation for 26 years and Nixon said it wasn’t a challenging decision or big question to order the sign.

“We’re just extremely clear on this topic and always have been,” she said. “We’ve had people come in off the street and say, ‘thank you for the sign.’”

All over the Greater Northwest Episcopal Area, churches and church leaders started changing the reader boards outside of their buildings, held prayer vigils, and talked to local media – apologizing for their denomination’s continued harm of LGBTQ+ disciples. They also used the opportunity to amplify their message that God loves all people, and that they are standing firm and not going anywhere. 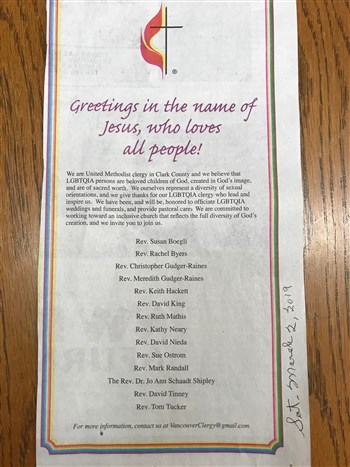 In Clark County, Washington, most of the clergy took out a quarter-page ad in “The Columbian” newspaper on Saturday insisting that they would still welcome LGBTQ individuals and would be happy to perform same-sex wedding ceremonies, funerals and pastoral care.

“We need to be explicit in our love and understanding,” said Rev. Meredith Gudger-Raines of Ridgefield UMC, who organized the ad.

While Battle Ground UMC and Vancouver Heights UMC are the only reconciling congregations in Clark County, others are moving that way and placing this ad was a statement of their faith and commitment to moving forward.

Gudger-Raines attended the special General Conference as an observer and came home and started an email chat with a few of the local pastors with whom she serves about doing something. The email kept getting forwarded until she had 15 clergy publicly affirming their commitment to the LGBTQ+ community.

“I think it was the next step. It was an intensification of our conversations,” she said. “We knew the (ad) was a big deal. But at the same time other people have been far more brave and far more risky than we have by putting our names out there.”

As reported by the Spokesman-Review, Rev. Heather Seman of Community United Methodist Church in Coeur d’ Alene emphasized, in her message to her congregation on Sunday, that the sign she put outside of the building that says “All are welcome. All means all” is about inclusivity.

Seman said that while she was putting up the sign, she said to herself, ‘Lord, this is all you.’”

At Hillview United Methodist Church in Boise, there was some mourning and a need to be in community with one another, which prompted a mid-week worship service and prayer vigil. 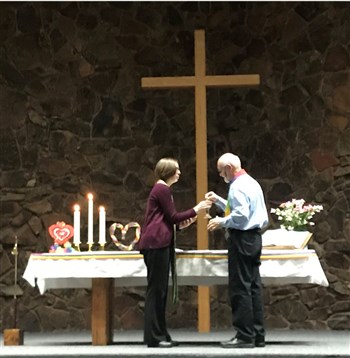 Sage District Superintendent Karen Hernandez was asked to be part of the lamenting, yet hope-filled service, which including playing the song “Somewhere Over the Rainbow” and an offering filled with brightly-colored cards on which worshippers wrote both their fears and hopes for the church.

There were clergy and laity present as well as clergy from other denominations, there to offer support.

“I was thrilled to have broad participation,” Hernandez said of the worship service pastor Brenda Sene put together.

In the Alaska Conference, there were some services of lament as well, conference officials report.

"Because our faith teaches us that bad news never has the final word.  And if good news is taking too long coming, they get active and create some," she said. "So, first our people are tending to their relationships with LGBTQ people in their churches, to be a healing presence in the face of harm done. And second they are giving voice to the gospel values that have shaped their faith communities, because it’s the values that are at stake. People who believe that Jesus taught them to love their neighbors are going to work to bring the church back to Jesus’ teaching. It really is about love."

Since posting a picture of their sign on Facebook, Nixon said she saw several other churches – even non-Methodist ones – sharing their picture and re-affirming where they stand.

On Sunday, Nixon had a visitor at the church who she recalled told her, “Just so you know, I could come back here because my son and his partner could get married here.”

But the sign and news out of St. Louis also influenced a boisterous worship service in Corvallis with open conversations after church where

“Nobody’s trying to jump the gun about what the best next steps are. We’re looking for leadership and wisdom from the Western Jurisdiction and the rest of our bishops,” Nixon said. “We’re not trying to be reactive. It was a response. There is so much about being Methodists that we love and abide by, but (General Conference) created a really terrible image for The United Methodist Church. For the sake of unity, we’ve sacrificed justice. There’s an opportunity here to stand up for justice.”