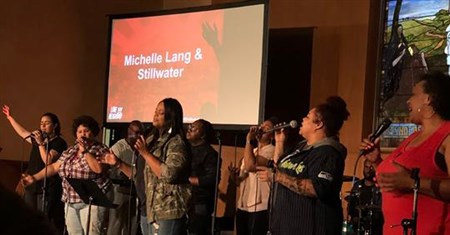 He knew he was in the right place for a revival – an Ordinary Revival put on by the Greater Northwest Episcopal Area in collaboration with the Parish Collective.

Ordinary Revival is a new ministry of the Greater Northwest Area innovation team and the event in Portland the last weekend of June is just the first of many events rooted in worship, storytelling and discussions that will take place across the area this summer.

“We need a spiritual renewal and a church renewed,” said Dr. Rev. Leroy Barber, director of congregational vitality for the Oregon-Idaho Conference.

The United Methodist Church is diminishing, and Barber said the church is looking to engage new people in new places and new leaders, too.
The Ordinary Revival series is about connecting churches to the greater communities they serve while also bringing in voices from outside of the church, he said.

“We’re purposefully diversifying the crowd – making it racially diverse – and bringing in people who aren’t part of the traditional church,” Barber said.

At the first gathering in Portland, Barber had approximately 100 people present. That included leaders from local UMC churches as well as new faith and non-denominational communities as well as local community members and business owners.

The Ordinary Revival series include worship and celebration, with a lot of music incorporated as well as roundtable discussions. Barber said event organizers are using the PechaKucha program to incorporate individual storytelling into the events as well.

Also included in these events are workshops on everything from community organizing to rural church vitality to race and equity.

Umbdenstock said this event was unlike any other training he and other UMC clergy are likely to attend. For one thing, putting the emphasis on diversity means participants from predominantly white UMC churches in Oregon-Idaho are going to see people who don’t look like them and they’re going to gain more perspective from those diverse voices.

“We need to not be hostage to our racial backgrounds,” he said. “I think it’s crucial we listen to that. Otherwise we’re going to repeat the same mistakes we’ve made in the past.”

The next Ordinary Revival will take place Aug. 24-25 at Wesley First UMC in Eugene. You can also catch an Ordinary Revival in Spokane Sept. 7-8 (location TBD), Boise at First UMC Sept. 14-15 and in Seattle Sept. 21-22. A revival in the Tri-Cities area of Washington is also in the works.

Register for an Ordinary Revival at ordinaryrevival.org.