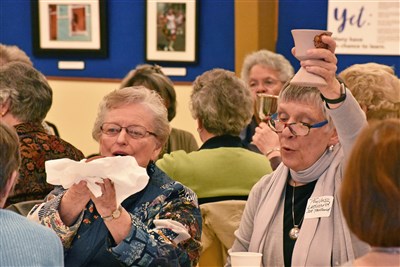 Some came curious. Some came concerned. Some were embarrassed.

But they came and sat around tables on Saturday and Sunday in churches in Portland; Lewiston, Idaho; and Anchorage and began to talk. And listen.

“I really didn’t know what to expect. It was kind of a last-minute thing that I decided to go along with my wife,” said David Rudawitz.

“I don’t know if I was changed any, but I did find it very valuable to have more than just my own generation in our discussion group,” he said.

The Table Talks are designed to focus on the topic of human sexuality and the future of The United Methodist Church and how church members can be in productive conversation about the issue. Talks will continue to happen throughout Oregon, Idaho, Washington and Alaska over the next several months.

In addition to worship and questions to consider, participants were given an update on the work of the Commission on a Way Forward and the two church models currently under consideration by the Council of Bishops to be voted on at the special General Conference session in February 2019 in Saint Louis.

In Portland, Rev. Donna Pritchard, senior pastor at Portland First UMC and a member of the Commission, gave a brief overview of the two models, the work ahead for the Council of Bishops and the implications of what a church split might mean for local congregations.
In Lewiston, they played the video overview Pritchard created with the same content. 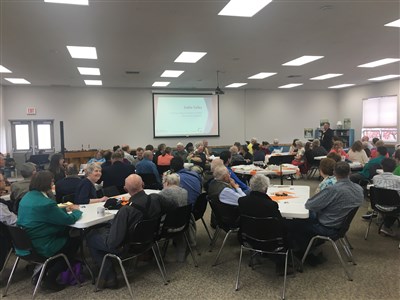 Before getting into questions discussed around their tables, participants on Sunday were asked to follow a covenant of “staying curious, being kind, honoring other people around the table and listening with as much passion as each person wanted to be heard.”

“There is no expectation of consensus,” Martin said.

Turnout for each of the Table Talks was better than expected. In Portland, organizers were expecting approximately 60 to 70 people and 100 showed up. In Anchorage, 11 people signed up, but 18 showed up on Saturday. John Townsend, Inland District lay leader in the Pacific Northwest Conference, said 87 people showed up to the Lewiston Table Talk on Sunday after only 9 registered beforehand.

“I think it reflects there is an interest in this. There is curiosity,” Townsend said. “There were not any lulls in the conversation.”

Townsend said people came to the tables on Sunday with deeply-held convictions and beliefs about human sexuality and, like Martin said, there was no expectation of consensus. There were perhaps a few people who left frustrated, but that’s understandable, given the nature of the conversations, he said.

“I think the conversations were animated, but not heated,” Townsend said. “No one’s asking anyone to change their mind.”

In Anchorage, Sandra Woods said she found the discussion productive and hopeful, for one main reason.

"One of the successful aspects of the structure was having communion first," she said.

Woods characterized Alaska as a conservative state, but the member of the United Methodist Church of Chugiak said there was a diverse group participating in the Table Talk on Saturday. One of the local Reconciling Ministry congregations was represented, as were folks who hold views that homosexuality is not compatible with Christianity.

"Everyone realized it is a divisive issue," she said, but the questions were written and asked in a way that was non-threatening.

As a 25-year-old queer person in the church, Aaron Pazan thought it was important to be present for the talks in order to be part of the conversation, not just a person who is a topic of conversation.

Pazan came to Portland First UMC on Sunday and found more than 100 people – at least 20-30 more than expected – filling up Collins Hall.

During the breakout conversations revolving around the questions on human sexuality, Pazan was pleasantly surprised by the diversity of the group. Pazan learned about the Korean culture and its approach to human sexuality. 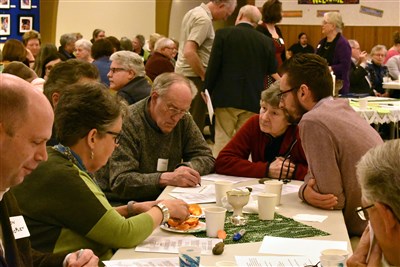 “I didn’t have any expectations,” Pazan said. “I just came with an open mind knowing that what will happen will happen. Through these Table Talks I feel like we have a better understanding of each other and hear each other’s voices in a setting that is not as upfront and more local.”

Though he enjoyed the discussion, Rudawitz said he was happy to gather more information about the issue of human sexuality as it relates to the overall future of the church. He was unaware of some aspects of the discussion and some of the history of how the United Methodist Church has approached human sexuality.

He has hope that the church will remain intact, while continuing to uphold differing viewpoints, and be more inclusive down the road.

“I think it’d really be good if we could just change and see what happens,” Rudawitz said. “I think everyone should just chill out, because I think overall when it’s finished it will be good.”

"It's not just about saying what you want to say," she said. "You get to hear other people's stories. The setting is about what unifies us rather than divides us."

Find a Table Talk happening near you on the Greater Northwest Area website.