The following profile of the history of Hope United Methodist Church was written by pastor Lura Kidner-Miesen and shared as they celebrated a “history of love” with the closure of their beloved church in Drain, Oregon. It has been edited for presentation here.

In the mid-1800s dedicated Methodist circuit riders covered hundreds of miles on horseback and brought the good news of Jesus Christ to the pioneer families in the Yoncalla and Drain area. They held religious services and worked to serve the needs of a scattered people. 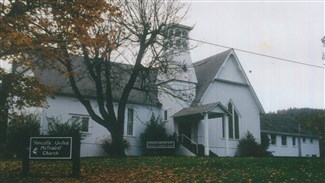 A Methodist Church was organized in Yoncalla around 1874. A Sunday school class was organized in 1890 and met in the public school. The first church building was constructed at the corner of Applegate and A Streets and was dedicated in 1892. In 1914 the church building was destroyed by fire. In 1918 the Presbyterians traded their Birch Street church building for a Methodist church in Jacksonville. So it was that the church building on Birch Street became the worship site for many Methodist members and their pastors. Over the years the congregation added a social hall, kitchen, fireplace, furnishings, and classrooms, as well as doing extensive remodeling. The building has long been a historic landmark in Yoncalla and the site of numerous local events. For many years, before the building of the community center, the Yoncalla church housed the senior meal site.

In the late 1870s, just a few years after the Yoncalla church began, a Methodist Church was organized in the Drain area. The congregation met at the Academy Chapel. The first recorded marriage was conducted in 1879 and the first baptism was in 1890. 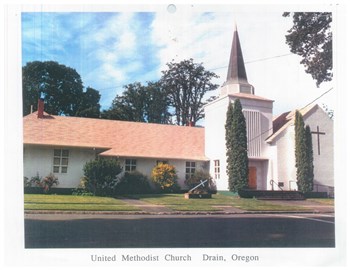 In the 1890s property was acquired in Drain and a church building erected. In addition to the weekly worship service, there were classes and gatherings for all ages. The congregation renovated and added to the building, but it was damaged when the basement flooded several times. In 1949 and 1950 the congregation met in the H.A. Cool hardware store while the old church was razed, and this church built in its place.

The first worship service in the new sanctuary was held December 24, 1950, with the choir presenting a Christmas Cantata and the sixty-year-old bell ringing from the new steeple. In the following decades, there would be additions and major remodeling projects.

Children have grown in their love of God and others through Sunday school, Vacation Church School and music programs. The youth of the community met for instruction, fun, and fellowship through the Epworth League, then the Methodist Youth Fellowship and finally United Methodist Youth Fellowship. The youth gained new experiences as they traveled to large youth gatherings in other cities or at church camp.

Over the years the women of the church gathered for fellowship, study and spiritual growth, in addition to helping in the church, community, and world. These organizations were first known as the Ladies Aid Society, then the Women’s Society of Christian Service, and finally United Methodist Women. Minutes from Yoncalla’s Ladies Aid Society show that in the 1930s the women of the church were a driving force in the financial, missionary and social life of the church and community.
While the men did not usually have a formal men’s organization, they were an important part of the congregation. They took part in volunteer work, service, study, and committees. They joined with people of all ages for worship, fellowship, Bible study, and classes.

In a region of great natural beauty, many people experience the Creator through creation. Youth and adults were active in the church camping program. The Drain United Methodist Church had a significant part in rebuilding Loon Lake Lodge after it was destroyed by fire.

Over the years the Yoncalla and Drain congregations aged and grew smaller. They recognized there needed to be a change in order to continue following Jesus Christ, serving their communities, and sharing God’s love. A merger committee was formed with representatives from both congregations. The committee met many times. The congregations worshipped together for a year, alternating between the Drain and Yoncalla church buildings. The remaining Yoncalla members held a farewell worship service the last Sunday of December in 2010. Special memorials and other items were moved to Drain while the remaining items were sold. It was a time of sadness, but also new life. The Hope United Methodist Church was formed and started meeting in Drain while the Yoncalla church building was sold. Yoncalla Assembly now worships in what is called The Old Birch Street Church and United Methodists can have their memorial services in the building if they so desire.

In the past decade, the Hope United Methodist has continued to show God’s love and help people grow in their love of God and others. On Sundays, people gather to sing favorite hymns, share a meal, pray and worship. Neighborhood children have been welcome to share the Sunday meal and hear a children’s story. The commitment to camping continues through camp scholarships and money given to remodel the boy’s cabin and provide modern showers and bathrooms at Wallowa Lake Camp.

Thousands of dollars in scholarships have been given to graduating seniors, and that tradition continued this weekend at both high schools.
People in this congregation have fed and clothed those in need by providing a space for the Fish Food Bank, the clothing bank, cake and bake, and the quilters. We have helped the sick and former prisoners by leading worship at Coast Fork Assisted Living, providing space for AA, helping individuals with transportation, and paying to have a gang symbol tattoo removed.

Even in these final weeks, our spiritual community continues to share God’s love and touch lives because that is who we are. The parsonage next door has been sold to provide a family a home. This church building has been remodeled and improved so it can continue to bless the community through its new owner. While we grieve the end of our church, we walk with Jesus Christ into the future and into eternity, empowered by the Holy Spirit, and surrounded by God’s love and grace.

As we say goodbye to the place of worship, we know the Christian Church is not a building, but a spiritual community made up of God’s people. We are now going to have a minute of silence. This is an opportunity for you to remember and give thanks for the people of the Hope, Yoncalla and Drain United Methodist Churches.