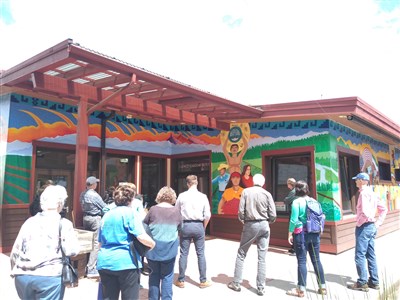 Last Christmas, Jennifer Hurtado Daniels’ family saw a news story where a church placed a nativity scene behind a wire fence to highlight Christians’ overwhelming disgrace in the United States’ new immigration enforcement plans. Plans that are separating families at the border.

Without skipping a beat, Daniels’ 15-year-old son Theodore quipped that it would be more accurate for the Baby Jesus to be in a separate cage from Mary and Joseph.

“That was a great parental moment for me; hearing that my son understand what injustice and inhumane treatment looks like,” said Daniels, a lay leader from Philomath.

That was part of the reason she and Theodore, attended the Oregon-Idaho Conference’s first-ever immigration summit last week. The event was held in partnership with the Interfaith Movement for Immigrant Justice (IMIrJ) and Pineros y Campesinos Unidos del Noroeste (Treeplanters and Farm Workers United of the Northwest, PCUN).

“Motivated to learn how to better reflect God’s love to the immigrant population, my son and I attended the Immigration Summit. We learned about what is taking place in Oregon, how we can get involved and met other committed people from the United Methodist Churches of Oregon,” Daniels said.

Natalia Olivares, immigration justice intern with the Oregon-Idaho Conference, said this summit was a way to know what’s happening around Oregon and the rest of the country, as it relates to immigration and justice. Many developments in immigration are hurting our neighbors and thus hurting God.

“Every time we gather is an opportunity to be real with each other and to talk about and practice what it is to be disciples of Jesus Christ for the transformation of the world,” she said. “What’s happening is not Christ-like or life-giving.”

The group heard from immigration advocates like IMIrJ’s Sarah Loose and the Oregon-Idaho Conference’s Rev. Jorge Rodriguez about the Driver’s License for All campaign in Oregon, which would allow Oregon residents who pass the written and driving exams and provide proof of residency to receive a standard license for driving, but not federal identification or airline travel. Such a license will reduce discrimination against those without document while allowing them to safely drive and interact with law enforcement officers.

Olivares said they discussed how new federal regulations on enhanced IDs are making it unfeasible for people without the proper documentation to go about their daily lives without fear of being racially profiled.

“That’s what we don’t want in our beloved community,” she said.

Daniels said her husband’s grandfather immigrated to the United States in 1915 from Guatemala and immigration justice issues are of great concern to her family.

“We learned about what is taking place in Oregon, how we can get involved and met other committed people from the United Methodist Churches of Oregon,” she said. “It’s clear that we have work to be done in this current climate of hateful discourse about our brothers and sisters from other countries. Many have paved the road for caring for the immigrant population and now our family can join in and make a difference.”

Olivares said it was good to take a day together and discuss the issues, while also touring the PCUN offices in Woodburn. The group was encouraged to take part in calling Oregon legislators to support House Bill 2015 (the Driver’s License for All legislation), finding more churches to partner with IMIrJ and being more watchful of discriminatory practices done by U.S. Immigration and Customs Enforcement.

“We need to be mindful and act,” Olivares said, “knowing that fear keeps us from being faithful and overcoming that [fear].”