When a call came out from the Rio Texas Conference for help with relief efforts after Hurricane Harvey wreaked havoc on south Texas, Emergency Response Teams (ERT) from the Greater Northwest Area were ready to respond. 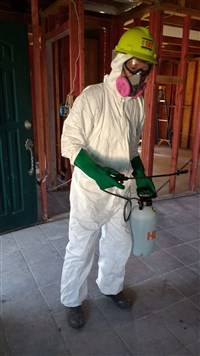 Team members reported numerous small, coastal communities near Corpus Christie were impacted, with thousands of homes destroyed and damaged and countless residents displaced. The Rio Texas Conference reached out nationwide for assistance due to the overwhelming devastation of Hurricane Harvey.

ERT members from the Oregon-Idaho Conference said the Sinton First United Methodist Church became a makeshift volunteer center, opening its doors to house groups of volunteers in an unused education wing. The team helped three families during its first week, and a second team with more volunteers from the PNW Conference picked up where the first team left off on the third home.

Team members did everything from cutting up downed trees to tarping roofs, mucking out wet contents and building materials. The purposes of ERTs are to make homes “safe, sanitary and secure.”