Madras UMC helps community one pair of socks at a time

Madras UMC helps community one pair of socks at a time 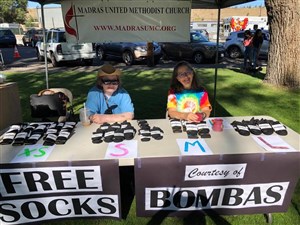 There are several different ways churches try to be in partnership with their local communities to meet the needs of those in need.

In Madras, the United Methodist Church has put on community meals, held a prom for the local LGBTQ+ community and, most recently, handed out 1,000 pairs of socks – no metaphorical strings attached.

Rev. Nancy Slabaugh Hart, who came to Madras UMC in 2017, had experience working with the philanthropist sock company Bombas from her previous service as a pastor in Great Falls, Mont. She had heard of the company in 2015 and their mission to give away a pair of socks for each pair purchased.

“I wrote them to see if I could purchase some of their special socks for a downtown sack lunch ministry my congregation sponsored in Great Falls. Their reply was immediate—apply online and we will give them to you for free,” she said.

Her first year in Madras, Bombas donated more than 400 pairs of socks for the church to give away at Madras’ annual “Community in the Park” event. Slabaugh Hart said the socks were gone by 11 a.m.

Volunteers from the church handed out more than 1,000 pairs of socks at the “Community in the Park” event in late July.

On the company’s website, Bombas boasts that they have given away more than 10 million pairs of socks since starting in 2013. The socks are specially designed to “specifically meet the needs of people who don’t have the luxury of putting on clean clothes every day, such as anti-microbial finishes, reinforced seams and darker colors to show less visible wear.”

Slabaugh Hart said the church has enough socks now to provide them for anyone in the community who needs them through the rest of the year.

“There are so many times when we believe we are powerless to effect real change,” Slabaugh Hart said. “Companies like Bombas are showing us that we can all make a difference – by working together.”