Though the term “abundant health” might be new to churches in the Oregon-Idaho Conference, survey results show the work being put into abundant health ministries is well understood.

Abundant Health is an initiative of the General Board of Global Ministries of the United Methodist Church, working to bring better health to people in every place. The four focus areas are: active living, healthy eating/nutrition, mental health and drug and tobacco prevention.

The Oregon-Idaho Conference is taking part in this new initiative by encouraging churches to identify ways in which they are already participating in this ministry and help churches to expand their offerings.

“What most surprised me is that there doesn’t seem to be a relationship between the size of the church and the breadth of ministries the congregations are engaged in,” said Emilie Kroen, Annual Conference Abundant Health Task Force Leader.

In Jefferson, Oregon, the United Methodist Church there has become a crucial partner in addressing the hunger needs by becoming one of the main food pantries in their area, providing meals to an average of 275 families  per month in 2017. The church built a 14-by-40-foot building on “the last available inches of space on the church property” in 2015, according to Tami Manning, one of the church’s food pantry coordinators.

“It’s been huge for a little teeny church,” she said.

They have approximately 25 people in attendance on Sundays, but their food ministry has drawn attention from plenty of people outside of the church. Some of those people have even started attending Jefferson UMC.

“This is a community pantry on the church property,” Manning said. “We have a wide base of volunteers. Our major tenant is kindness.”

They didn’t start this with a shed, though. When Bishop Hoshibata started the end hunger initiative in 2009, Jefferson UMC started with a backpack program, feeding 150 kids per week. The church kept that program running for six years and when one of the food banks in the area started to struggle, Jefferson UMC stepped up its food pantry program. 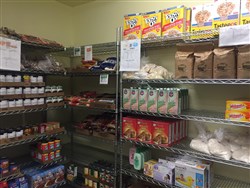 Manning said they now partner with the Oregon State University Food Heroes program to offer healthy eating tips and recipes and sometimes they provide demonstrations on meals that can be prepared with food from the pantry. This is in addition to the community garden – open to everyone – the church also provides for people in Jefferson.

“People are really motivated and we’ve actually brought new people into the church,” she said.

At Rupert United Methodist Church in Idaho, they’ve also seen their efforts around abundant health take off with a community food pantry. Open two days a week, it’s one of only a few food pantries offered in this town of 4,200 people.

It’s a lot to take on for what Crowe described as an aging, small congregation. But people continue to see the need and continue to volunteer.

“You’re helping someone. That’s the main thing,” Crowe said. “It goes and grows. This congregation – even though it’s small – is very generous.”

“What is exciting is that these ministries have continued and expanded, even in the smallest congregations,” she said.

Healthy eating is just one areas of focus for the Abundant Health initiative. Other areas are: active living, mental health and drug and alcohol abuse prevention.

Churches like Cottage Grove UMC are offering counseling services on site, while Kuna UMC hosts 12-step groups at its church. Roseburg UMC hosts a walking group. And the examples don’t stop there.

Kroen said to expect more news about Abundant Health initiative in the coming weeks and months. Churches are still encouraged to complete surveys on the Conference website.