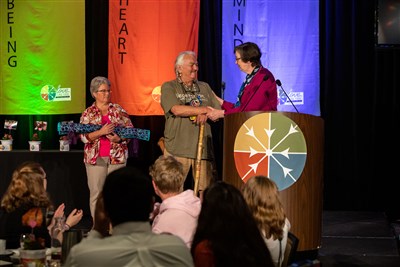 Because of his clear demonstration to everyone on repentance, and his many years of service to Native American Ministries, Duane Medicine Crow earned the Bishop’s Award for 2019, which was presented during Thursday night’s awards banquet.

"I did not see this coming. I am really overwhelmed," Medicine Crow said. "I didn't realize what a marvelous fellow I am."

Medicine Crow, who has been active in the Conference since moving to Salem to be with his daughter in 2006 and joining Morningside United Methodist Church.

Medicine Crow said as he moved into adulthood, he learned more about his culture and history, which lead to a divine moment during the Annual Conference gathering in Boise in 2018.

Members of the Nez Perce Tribe were attending Annual Conference as the Conference committed to an act of repentance by returning a parcel of land at Wallowa Lake Camp to its rightful owners.

After that moment had happened, Medicine Crow saw an opportunity. He went to the table where the Nez Perce guests were sitting and apologize. He apologized for the harm the Crow people had caused the Nez Perce 141 years prior.

The Nez Perce were fleeing the persecution of the U.S. Army and the Crow declined to help.

He apologized to each person one by one and gave them each something of his as he did.

Medicine Crow said he did it for two reasons: 1) it was personal. The history of harm his people had done to the Nez Perce was something he felt really bad about. Also, repentance has a way of healing.

“This is something that really is possible and it can feel pretty good,” he said.

"Duane Medicine Crow, thank you for your proud, humble, honest witness to the power of personal reconciliation for historic trauma," Bishop Stanovsky said as she handed him his award.
---
Newman United Methodist Church in Grants Pass received the One Matters award this year, for the church’s continued commitment to welcoming people and growing in membership because of it.

“People identify us as the wacko liberal church in town,” laughed Rev. Richard Fuss. “When people ask what the church stands for I tell them we’re a church that encourages people and allows them to be authentic and seeking and ask their questions and to gather in a safe space while we all look to try and understand God a little more.”

Members of the congregation called the church building an icon and a welcoming center.

“It’s an oasis in our community,” said Margie Brandon.
--- 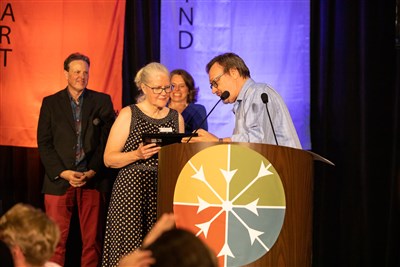 For her dedication to campus ministry in the Annual Conference, reaching out and positively effecting the lives of students and others on campus, Linda Grund-Clampit was presented with the Asbury Award.

“Linda has advised leadership in local ministries and on district and conference levels as to effective campus ministry.  Since she has been involved in Safe Sanctuary efforts, she has a sensitivity toward people who are healing from trauma while completing their education,” said Rev. Warren Light. “Linda has made it a priority to see that smaller campus ministries are not overlooked in funding and other means of support.  She has promoted inclusion on every level. Linda is always up on the latest UMC opportunities, including but limited to scholarships.  Her watch word is ‘caring.’ "
---
United Methodist Women also announced several awards and grants Thursday night, according to President Becky Warren.

The Isobel Zimmerman Fund Grant distributes grant monies to programs directed toward leadership development of Native Americans or African Americans or in support of a Foreign Mission Project supported by United Methodist Women. Two grants of $1,000 each were awarded this year:

One went to Todd Bartlett, Executive Director, Camp and Retreat Ministries to fund partial support for the hiring of an African American Resident Counselor at United Methodist program camps this summer. Such work develops leadership skills and opportunities for faith-sharing and faith-building.

Another was given to Peggy Lovegren, Wallowa Lake United Methodist Camp, to provide funds to scholarship Native American youth to attend Horse Camp. The nurturing of cultural heritage in a safe environment with the intention of increasing self-confidence, communication skills, and interpersonal relationships of Native youth certainly fulfills the intention of the Zimmerman Grant Program.

There are 2 recipients this year, but only one was announced Thursday: Cynthia MacCleod.

Warren said MacCleod has advocated for racial equity in the United Methodist Church for 30 years, She provides racial equity training for Portland school faculty. Since semi-retiring as an educator, she has started classes on Courageous Conversations intended to help white people have conversations about race, institutionalized racism, and white privilege. Whether she is ringing bells or teaching Sunday school at Fremont United Methodist Church, she compassionately guides others to discern how they can become advocates for Racial Justice.