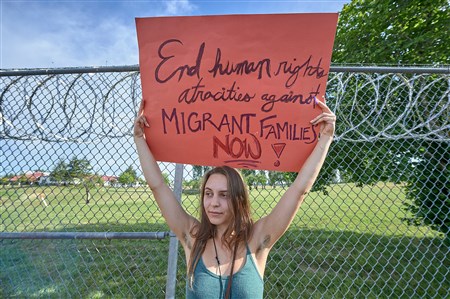 
Feeling increasingly frustrated with President Trump and his administration’s decision to separate asylum-seeking families from their children, several United Methodists joined a large crowd at the federal prison in Sheridan, Oregon, to demand better treatment of immigrants and their families.

“I felt some internal longing at Annual Conference for a call to action,” said Karlene Clark, pastor at Wesley UMC in Eugene. “I saw an opportunity to use my body to do something. How much worse do things need to get to move our bodies to action?”

According to the Statesman Journal Newspaper, there are currently 123 male asylum seekers being housed at the Sheridan Federal Correctional Institution. They arrived in mid-May and come from countries such as India, Nepal, Peru, Russia, Guatemala, Brazil, Armenia and more. The newspaper reported that at least six of the men housed there have been separated from their children.

Representatives from non-profits such as Unidos as well as several faith-based organizations were present, including Rev. Jorge Rodriguez of Hillsboro First UMC, who spoke and sang with the crowd.

Sarah Richard brought her two daughters, 4 and 6, to the Monday evening rally from Hillsboro. Like many across the country, she’s watched in horror as asylum-seeking families have been ripped apart by the U.S. Government and children have been housed in cages in old warehouses along the border. 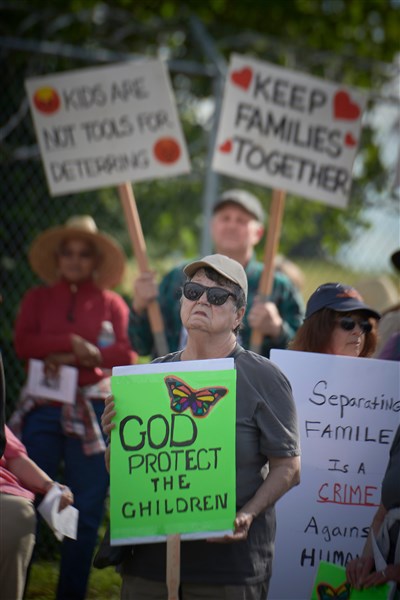 “When your government is doing something wrong it’s important to stand up. It’s my spiritual duty to stand by my brothers and sisters. We need to see these human beings as our neighbors and show compassion,” said Richard, who attends Hillsboro First UMC.

She brought her daughters so they could see people praying and singing and a wide variety of humanity acting together.

“Apparently it’s a privilege in my country to have my kids with me,” Richard said.

On Wednesday, President Trump signed an executive order ending childhood separations, but still indicate families seeking asylum will be detained and it’s still unclear what will be done with the more than 2,000 children currently being detained in facilities around the country.

Clark said as they gathered, prayed and sang, people reported being able to see prisoners standing in the windows through the barb-wire fencing. She’s not sure if the people at the window were asylum seekers or not.

But the crowd sang louder, and their voices could be heard reverberating off the building.