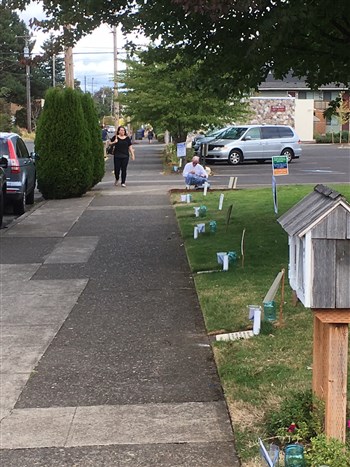 Montavilla United Methodist Church has decided to take church to the streets – well, the sidewalks at least – in its Portland neighborhood as a new way of reaching out to the community.

“We thought, ‘What would it look like to have 22 one-sentence sermons outside of the church?’” said Rev. Tim Winslea.

Quotes such as: “Hope will never be silent” from Harvey Milk or “A person’s a person, no matter how small” from Dr. Seuss or “I stand in prayer and would like to make it long, but I hear the crying of a child…” from Muhammed greet those who pass by the church.

As people from the neighborhood passed around the different pavers, they were invited to leave reflections on what that quote meant to them.
Winslea said Montavilla’s mission committee specifically chose quotes that weren’t just rooted in scripture or Christianity. They accepted several recommendations before settling on a diverse selection of quotes.

“We can be proud of who we are as Christians, but recognize we have other voices to listen to,” he said.

Robin Bown, a member of the church’s trustees committee, said as the neighborhood has changed, less people are committed to the idea of regularly attending church. 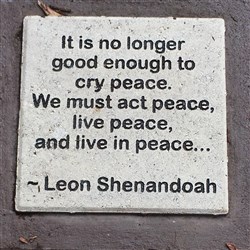 “This was our opportunity to lay out an invitation that all are welcome,” she said.

The pavers are scattered along two sides of the church and the parking lot toward the entry. They were purchased with a grant from the Columbia District Extension Society.

Bown said she’s already seen the pavers making a difference in the neighborhood as people stop to take in a quote they pass by. Sometimes they’ll look at one or two, other times Bown said they start following the sidewalk around the church to check them all out.

“It’s already been pretty amazing,” Bown said. “I didn’t realize it was going to be that much of an attraction. But there’s something there that speaks to everyone.”