If outreach ministry is akin to the gospel of Matthew – having faith the size of a mustard seed – then there are some mountains being moved in the Oregon-Idaho United Methodist Conference.

Whether it was handing out granola bars to kids, hosting an open mic night for people of color or making Christmas stockings for kids in need, several churches across the Oregon-Idaho Conference stepped up to try new ministries in 2017. It wasn’t challenging and didn’t break the bank to achieve, either.

“It’s not that difficult,” said Bobbie Mosher, a member of Nehalem Bay United Methodist Church. “We want the community to be involved.”

The three churches featured here are just a sampling of many across the Conference who reached out to their communities in new and helpful ways in 2017 and found that their work had little to do with proselytization and more to do with being the hands and feet of God – acting their faith.

“It’s been amazing because we now have this relationship,” said Rev. Christina Thompson of Boise’s Whitney UMC.
“If we want to make disciples, we have to value people first,” said Rev. Jon Umbdenstock of Portland’s Woodlawn Redevelopment Project. Here are their stories:

Stepping up to the MIC 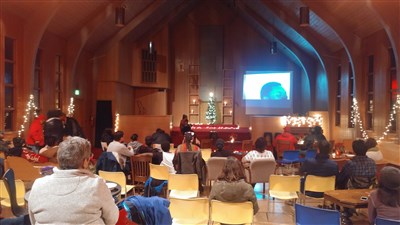 When Woodlawn United Methodist Church voted to close as a brick-and-mortar Sunday worship center, that didn’t mean the neighborhood ministry under that roof had stoped. The church has become a well-known community center in northeast neighborhood for the large number of people of color who call that area home.

Leading the new Woodlawn Redevelopment Project, Rev. Jon Umbdenstock said there was a lot of brainstorming about how best to serve a community of individuals who had so often been living on the margins while being ignored through years of gentrification of their neighborhood.

The brainstorming lead to the Woodlawn Multicultural Impact Collective – Woodlawn MIC. It sounded like MIC – short for microphone. And what do microphones do? Amplify voices.

The Woodlawn MIC was designed to amplify voices of color in the community and it involves people outside of the church. In October they hosted their first Open MIC night to showcase the poetry of people of color. They had 50 people show up. So, they decided to do it again in December, with a Santa visit and more. This followed another poetry session in January. Each time they’ve had 30 to 50 people show up.

“It’s focused on poetry right now,” Umbdenstock said. “We may break into music and visual arts.”

It’s now called the “People’s Poets” and they’ve got a young woman interning with the Woodlawn MIC to host the events.
Getting this event off the ground was easy, Umbdenstock* said. Organizers just had to make sure the sound system was working and through word of mouth – and $50 in social media advertising – people caught on to what they were attempting to do.

“It was mainly just having the space available,” he said.

Umbdenstock said this isn’t about bringing people to church. Few people even know that Woodlawn MIC is connected to a specific church. The more important message, he said, is that people of color in this community are seeing that a church cares about them and is not seeking to silence their voices. Perhaps it’s making people more comfortable with Christianity, Umbdenstock said, without doing the proselytizing.

“Maybe it can help chisel down a wall or barrier,” he said. 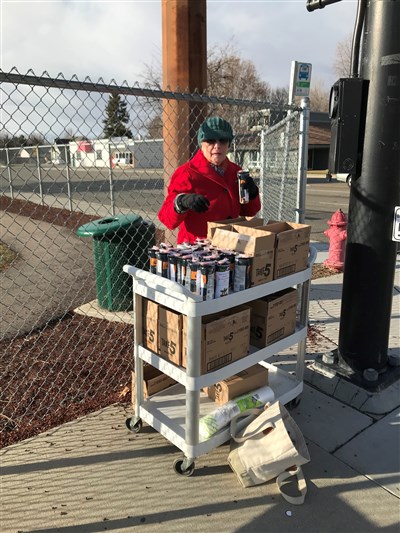 Before Whitney UMC ever ventured into a partnership with their neighborhood elementary school last year, they first had to make some observations.

There are 620 kids who attend Whitney Elementary School in Boise and Rev. Christina Thompson said South Junior High School is located just a couple blocks away. This means when school lets out, parents sometimes park in Whitney UMC’s parking lot waiting to pick up their kids. Approximately 40 to 50 junior high kids walk by, too. Both schools have high populations of low-income students.

Thompson said church members also observed an abundance of Clif nutrition bars in the food storage area where they house a different ministry through a partnership with the Idaho Food Bank.

“God was very clear to us that one mission was to serve the children,” Thompson said.

In May, the church started handing out Clif bars to students as they walked by every Wednesday afternoon. When school started back up again in August, so did the Clif bar snacks.

They also added a shaved ice stand during one particularly hot Wednesday in August – when a church member heard about their program and donated $500.

Whitney Elementary School has a high percentage of students who qualify for free and reduced meal plans based on their families’ income.

“Occasionally you know this is the only meal (students) are getting for the day,” Thompson said.

It is also where a few refugee families from Syria send their kids. Thompson said one of the Syrian boys shared his snack with another student refugee. The church puts a sticker with their logo on the Clif bars, and every Wednesday there will be a few volunteers from the church standing on the corner by the elementary school fence greeting students with a simple, “Hey, Happy Wednesday!” Sometimes a longer conversation is struck between the church volunteers and the students about upcoming tests.

Someday, Thompson suspects some of these families will seek out the church. But for now, all it needs to be is a simple act of love and kindness.

“We’re no longer the, ‘weird people on the corner,’” Thompson said. “People know we’re the church.”

Being the community’s grandparents 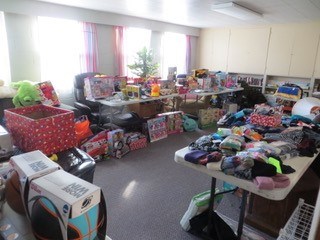 In Nehalem, taking care of children’s back to school needs as well as Christmas presents wasn’t a new thing for the community or the people at Nehalem Bay United Methodist Church.

But after a family who had started the Secret Angels giving program for children moved out of the area the Nehalem Bay congregation – comprised mostly of retirees wanting to live along the coast – stepped forward, according to Bobbie Mosher, a member of the congregation who has taken on this ministry.

“None of us wanted to see it fold,” she said.

Secret Angels became Christ’s Hands in Loving Devotion (CHILD) and the church picked up the ball in time to set up a community giving program for Christmas. Local businesses around town set up giving trees while Mosher and other volunteers reached out to the families in need to see what they wanted and/or needed for their children at Christmas.

The population of Tillamook County is distinct, with retirees who flock to the coast, but also with seasonal employees working in local restaurants and shops who are low-wage workers trying to make ends meet and feed their families during the off season, let alone provide their children with Christmas presents.

Some of the requests in 2017 were simple. Sisters wanted matching comforters for their beds. Others requested what could seem like far-fetched dreams – a bicycle – but people across Tillamook County made that happen.

“Our grandchildren don’t live here, so this gave us the opportunity to touch base with the children,” Mosher said.

In total they provided gifts for 69 children and 28 families.

Though the church took over managing CHILD in 2017, it is still a community outreach program and the board consists of church members and others in the community. They are looking forward to providing Easter baskets for children in April and getting geared up for the fall, when they meet with children individually to get them outfitted for the school year, complete with a backpack and new pair of shoes.

Mosher said the goal will be to get other communities throughout Tillamook County involved so that families aren’t having to find a way to get to Nehalem on top of everything else they’re juggling in their lives.

It may seem like a lot of work, but Mosher said all it takes is a little bit of time and organization.

“These children are all of ours,” she said. “It’s been really rewarding.”