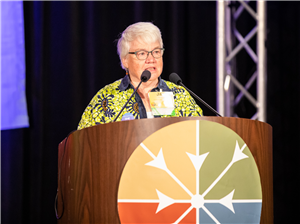 After serving a quadrennium plus pandemic year, Oregon-Idaho Conference Lay Leader Jan Nelson is stepping down from her post, which will prompt the election of a new lay leader during Annual Conference in June.

“I’ve gotten to work with a bunch of really talented, dedicated people,” said Nelson, who was also elected in 2019 as the primary lay delegate to General Conference, which has now been delayed until 2022.

Nelson will step down after Annual Conference wraps up at the end of June. She said she’s enjoyed her time as the Conference lay leader, doing her part in meetings to remind Conference leaders and clergy that the church is primarily made up of the laity.

She said she’s also tried hard in the last five years to remind laity that they play a critical role in the future of the church as well and must make their voices heard.

“I think a lot of laity need encouragement,” Nelson said. “It’s kind of a pushing and pulling.”

Though she is stepping down as the lay leader, Nelson is stepping into more responsibility with the Western Methodist Justice Movement as well as continuing to serve on the board for Methodist Federation for Social Action. 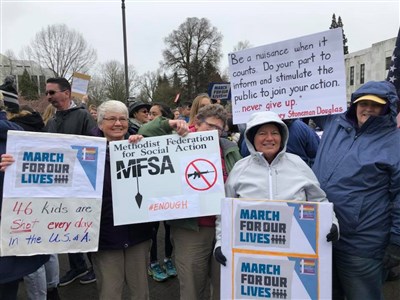 “My passion is with justice work right now,” said Nelson.

She’s been involved in the church for decades but stepped into various leadership roles once she retired as a math teacher in 2001. A member of Morningside UMC in Salem (part of the Open Door Churches of Salem-Keizer), Nelson has served as the Oregon-Idaho Conference lay delegate to General Conference in 2012, 2016, 2019 and will still hold her position when the pandemic-delayed General Conference meets again, likely in 2022.

As far as anyone knows, she’s the Conference’s first openly lesbian lay leader and lay delegate to General Conference.

As Conference Lay Leader, Nelson has served on the Oregon-Idaho Conference Board of Lay Ministries and enjoyed the way her fellow board members put together an online laity session in September that was reflective of the missional priorities of the Greater Northwest Area: doing good, doing no harm and staying in love with God.

The Zoom session – much different than other laity sessions held during Annual Conference gatherings – featured video after video of churches doing justice work, helping their communities fight COVID-19 and so much more.

“To me the best stories are the ones about churches helping people in their community,” Nelson said.

Nelson said she’s hopes the next lay leader will be a strong voice for the laity of the Oregon-Idaho Conference.

“It’s been a pleasure to work with Jan as the Conference lay leader. She has done a remarkable job being a justice-focused voice of the laity in the Oregon-Idaho Conference. I am grateful for the wisdom, experience, and humility with which she’s served as a lay leader during some challenging times in the life of the church,” said Laurie Day, Oregon-Idaho Conference director of connection ministries. “She will no doubt continue to lift up the voice of laity in her roles with MFSA and the Western Methodist Justice Movement.”

Any lay member of an Oregon-Idaho congregation can be elected lay leader. A term typically lasts four years. A lay member may suggest themselves or nominate another person using the attached form. These nomination forms should be submitted by April 15 for the Board of Lay Ministry to review nominations and get them prepared for pre-Conference reports so that lay members to Annual Conference can elect a new leader during the online laity session on June 14.

Nominations will also be accepted from the “floor” of the online laity session.