New LGBTQ+ advocacy coordinator ready for spirits to be "stirred"

New LGBTQ+ advocacy coordinator ready for spirits to be "stirred" 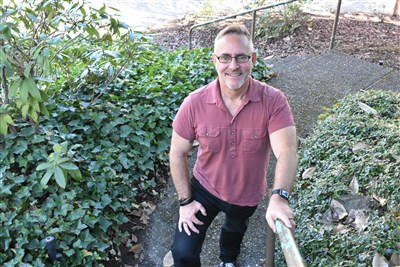 There is no shortage of work for Rev. Brett Webb-Mitchell, who just recently stepped into his part-time role as the Oregon-Idaho Conference’s LGBTQ+ advocacy coordinator for the next year.

With the entire United Methodist Church on the precipice of change – or not – when it comes to the full inclusion of LGBTQ+ individuals within the denomination, there’s plenty to accomplish in the next year.

In addition to helping facilitate table talks on the Commission on a Way Forward discussions with local congregations here soon, Webb-Mitchell will also be assisting with the Conference’s “Called to Love” workshop series and preparing for the “Listening with open hearts: Building bridges and deepening relationships” gathering in Portland in August.

“I know that history is unfolding,” said Webb-Mitchell, who was raised Methodist but now serves as an openly gay pastor in the Presbyterian church.

Oregon-Idaho is one of the first United Methodist conferences in the country, as far as the Reconciling Ministries Network can tell, to hire an individual to work specifically on LGBTQ+ inclusion efforts.

By doing this, the Conference is putting its resources where its mouth is, according to Rev. Izzy Alvaran, western regional organizer for the Reconciling Ministries Network.

“It shows the commitment of the Conference to welcoming LGBTQ persons,” Alvaran said. “Reconciling Ministries Network salutes Oregon-Idaho for being bold.”

The Oregon-Idaho Conference has tried to be bold for a while now. The Conference has been a reconciling one for 22 years now, with 38 reconciling congregations around the region and more than 300 people participating in the “Called to Love” workshops over in the last three years.

The Foundation is committed to providing grant funds to organizations which advocate for inclusion and Greathouse said the Conference’s Ministry Leadership Team wanted to keep moving forward with LGBTQ+ inclusion efforts. Hiring someone who can coordinate this strategic work became the necessary next step and the Collins Foundation is fully funding the position for the next year.

“It feels good to have created this position to dedicate these resources,” Greathouse said.

Webb-Mitchell is excited about the possibilities and forward-thinking conversations his work will hopefully create.

“It’s a wonderful challenge and opportunity to see history unfold in the United Methodist Church as people follow Jesus’ example of welcoming all, which includes accepting LGBTQ folks without apology,” he said. “I think I bring a modicum of wisdom of struggles of inclusion to the work of inclusion.”

Both Webb-Mitchell and Greathouse are mindful of people within the body of Christ – and within the Conference – who view things differently.

Greathouse said the Conference’s upcoming Table Talks being held in a variety of locations to discuss human sexuality and other issues related to the work of the Commission on a Way Forward and the future of the denomination are a big part of the work. The talks are designed to gain everyone’s perspective and have respectful, civil discussions in a sacred and spiritual manner.

“People participating in these events can help us learn how to have conversations about difficult subjects,” Greathouse said.

But Greathouse said you can’t have conversations about human sexuality and inclusion of LGBTQ individuals in the life of the church without inviting them to the table.

“Then we’re just talking about them,” he said. “Not with them.”

With them is where Webb-Mitchell’s life, work and spirit have been. He was an assistant professor of Christian nurture at United Methodist founded Duke Divinity School and now serves as an ordained pastor serving Community of Pilgrims Presbyterian Church in Portland. In addition to this, he’s written several books on the topics of human sexuality, Christian growth and what it means to be a gay parent. Book titles include: “Practicing Pilgrimage: Beyond Accessibility” and “Follow Me: Christian Growth on the Pilgrim’s Way.” Webb-Mitchell and his partner, Dan, have been together for 22 years, have two adult children and one grandchild on the way.

He’s lived through years of marginalization from the church because of his sexuality but has remained steadfast in his faith.

“I’ve followed the instructions Jesus and dusted my feet off,” he said. “It’s both exhilarating and exhausting. But at the end of the day I know I’m in God’s loving arms.”

He knows there are people who challenge his sexuality and he knows there are individuals who do not believe the United Methodist Church should change its position on homosexuality. Through all these conversations and gatherings over the next year, Webb-Mitchell just has one simple hope:

“As long as people can be open to the stirring of the spirit, the future can be brighter,” he said.