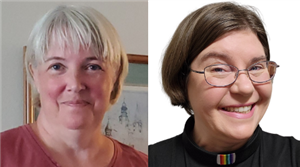 Earlier this month, the Oregon-Idaho Conference welcomed two new members to the team in order to better serve churches and ministry settings.

Rev. Laura Beville of Silverton, Oregon, began her part-time appointment as the Conference’s new ministry resource specialist in the Office of Connectional Ministries on July 1. Beville will continue to serve Silverton UMC part-time as well.

Utilizing existing financial resources, Beville’s position was created in the Office of Connectional Ministries to provide resources to local churches and build relationships between the Conference office and local ministry settings.

“The more on-ramps we give congregations to engage in ministry effectively, the more opportunities we have for each congregation to be effective in their own communities,” said Beville.

On July 18, Jennifer Fowler began working as the Columbia District Administrator, serving churches in the greater Portland area and along the north edge of Oregon along The Gorge. She will work with Columbia District Superintendent Tim Overton-Harris. She replaces Brandon Rhodes who is now heading up a new-start ministry in Coburg, Oregon.

Fowler comes to the Conference after serving as the office manager for Spirit of Grace Church in Hood River, Oregon, the last 13 years.
“When I saw the announcement for the job I just thought, ‘this is for me’ and it was good timing,” said Fowler. “I’m just excited to learn about new things and I wanted to be involved in the bigger picture of the church.”

Spirit of Grace is an ELCA and United Methodist yoked congregation in Hood River. Fowler was a member of the ELCA church when she was approached about the office manager position. She was on staff when the two denominations merged into one church in 2013.

It's been only 10 days and Fowler has been busy scheduling one-on-one clergy and laity conversations on Overton-Harris' behalf, which has given her the chance to start making connections with churches in the Columbia District right away.

Fowler said with a background in finance, she’ll stay on as the church’s financial secretary while working for the Conference, predominantly from her home in Hood River. She and her husband have two college-aged children.

Beville is likely a familiar face to folks in the Conference as she’s served churches in every district in the Oregon-Idaho Conference since she began her call to ministry as a licensed local pastor in 2001 before becoming an elder in full connection in 2006. She’s also been heavily involved in Camp and Retreat Ministries throughout her career.

She’s passionate about helping local churches access all the resources available to them. Already she’s been listening to churches talk about what sort of needs they have – everything from financial resources to training opportunities.

“It’s an ever-evolving position,” she said.

Beville is married with two children, ages 12 and 8.