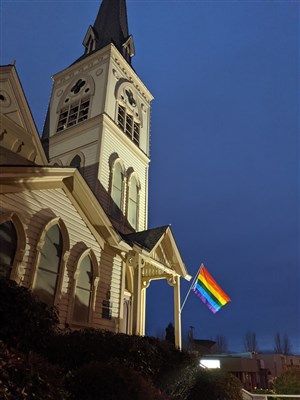 Newman United Methodist Church in Grants Pass, Oregon, took another step in their journey to be a welcoming and inclusive congregation to LGBTQ+ people. The Church council at NUMC was in unanimous agreement after General Conference 2019 that the church needed to be clear in its welcome to all people regardless of their sexual orientation or gender identity.

Beginning Feb. 4, 2020 Newman UMC began flying a rainbow pride flag from its main entrance. There was concern among some church members about the church being so public with this display of inclusion in a town known for being religiously and politically conservative. However, the congregation thus far has received zero pushback from the greater community. Throughout the day passersby can be seen taking selfies with the flag as they make their way down busy 7th street in Grants Pass.

Newman UMC’s pastor, The Rev. Ryan Scott, has received heartwarming feedback from members of the community.

“The response from the community has been supportive and touching” said Scott. “I’m proud that our congregation has taken this courageous step proclaiming our love for all God’s people.”

The church has received emails and phone calls from people in the community expressing their support and gratitude. One man, who recently moved to the community, shared with the church that he had attended another church in town and was hurt be their homophobic remarks. He told NUMC, “I really appreciate seeing the pride flag. It makes me feel safe and supported.” The Church also received a phone call from the parent of a teenager who recently discerned that they are transgender. The parent expressed how seeing the flag gives her hope.

LGBTQ members of the congregation have expressed how this makes them feel even more loved and supported in their church. They feel a sense of pride when they walk up the steps of the historic church built in 1890. Newman UMC is a landmark of the Grants Pass community and one of the most visible and recognizable buildings in the city. Newman members are proud of their history as a congregation that stands up for people. Flying the pride flag is a continuation of this legacy, Scott said.

Newman UMC has been a reconciling congregation for three years. They have continued to make steps in becoming more inclusive as they live into their calling as a reconciling congregation. Newman UMC is no stranger to supporting the LGBTQ community. They regularly host the Portland Gay Men’s Chorus and are the Southern Oregon home for the Eugene-based nonprofit, HIV Alliance. In July of 2019 they welcomed Rev. Scott as the first openly gay pastor to serve the church.

“Flying the rainbow flag seemed like an obvious thing to do considering this church’s history of being a place of welcome to all people no matter their sexual orientation or gender identity,” Scott said.

Newman UMC’s slogan is, “a place where love works.” This is evident in their welcoming of people who otherwise may not feel very welcome in Grants Pass. Flying the pride flag may not seem like a big deal, but it is having a meaningful impact on the congregation of Newman UMC and their surrounding community in Grants Pass, he said.