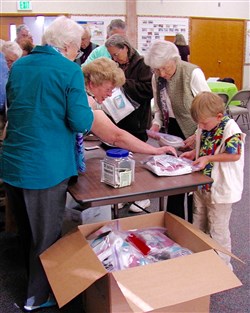 Celebrating UMCOR Sunday has become a work of precision and coupon-clipping for the people of Oak Grove United Methodist Church.

On March 11, church-goers in this community just south of Portland will create their own assembly line as they put together 300 health kits for the United Methodist Committee on Relief depot in Salt Lake City.

The church can make a record number of health kits this year because of local coordinator Laurie Yadon’s watchful eyes. The church raises money in August to purchase items for the kits – everything from brushes to hand towels to toothpaste – and buys all the items in bulk at once so that they can make sure each kit is complete.

Fred Meyer has just the right size of towels for these kits and Yadon and her fellow Women in God’s Service (WINGS) group members watch patiently for those towels to go on sale.

Yadon was floored recently when Fred Meyer put their hand towels on sale for not 50 – but 60 – percent off.  Plus, she had some extra coupons. The hand towels went from $4.50 apiece to $1.07.

“The more money we save, the more kits we can make,” Yadon said.

Yadon said it’s important for her church to do something on UMCOR Sunday (formerly known as One Great Hour of Sharing) in addition to the one offering a year that is taken to cover the costs of administering the global United Methodist ministry so that 100 percent of contributions throughout the year go directly into relief efforts. 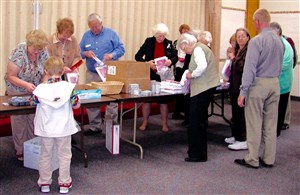 “It’s something hands-on. It’s not just looking at mission projects on the screen,” she said. “It makes UMCOR hands-on.”

Since starting this in 2011, Yadon said they’ve got their assembly process down to a science to minimize the time investment of volunteers. Even though they’ve got 300 kits to assemble, she said it should still only take them an hour.

People in the Oregon-Idaho Conference have been an integral part of kit-building and volunteering at the UMCOR depot for years now, according to Conference UMCOR coordinator Donna Waltman. For the last five to six years the Conference has been sending teams regularly to the depot in Salt Lake City to help organize the health kits, school bags and cleaning buckets that UMCOR distributes across the country. Additionally, kits have been organized and collected at Annual Conference for the last three to four years.

“When (churches) put the kits together, it builds community,” Waltman said. “By building the kits, it’s an immediate way to help.”

When disaster strikes and UMCOR needs to ship out a lot of cleaning buckets from the Salt Lake City depot, there is tangible proof of the importance of this ministry, Waltman said.

She sees churches in rural parts of the Conference through Portland and Boise participating in this tangible ministry, as well.

Waltman said churches wanting to hold some sort of UMCOR “kit party” like Oak Grove UMC should know the agency is focused on three kinds of relief kits – health, school and cleaning. Information on what is needed in the kits can be obtained at www.umcor.org. 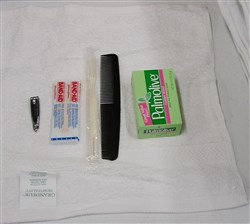 Yadon has a few tips for churches looking to get into the kit ministry:

Churches who are participating should have their kit collections finished by mid-April and delivered to one of the following pickup sites: Longtime UMCOR volunteer Steve Matthews will be traveling to those locations at the end of April to pick up kits and get them to the UMCOR depot in Salt Lake City. Waltman said people wishing to make donations to help offset some of Matthews’ travel costs, those with general questions about UMCOR kits or those wishing to volunteer at the Salt Lake depot, should contact her at 503-622-3226 or email her at dgwaltman@frontier.com.