There’s nothing quite as heartbreaking as stumbling across a grave of a young migrant infant in the desert.

But that’s what Oregon-Idaho Conference missionaries and volunteers Evelyn Erbele, Teri Erbele and Louise Kienzle got to see when they took an up-close tour of the U.S./Mexico border in early April near Nogales, Ariz., and Mexico.

“You just can’t describe it. There is nothingness, but this heat and wind and then you come across a grave,” Evelyn Erbele said. “And you realize you’re in Arizona.”

The tour was organized with other missionaries and volunteers in the Western Jurisdiction of The United Methodist Church to understand all sides of the immigration and asylum issues facing the United States and bring information back to local churches in hopes of supporting relief efforts along the border.

“We hear so much on the news,” said Kienzle, who is the United Methodist Volunteers in Mission coordinator for the Conference. “Who knows what’s real and not real.”

The Erbeles, in their role as missionaries assigned to the Western Jurisdiction, will be making more trips. Kienzle is hoping to organize an Oregon-Idaho UMVIM trip after seeing things up close and personal. 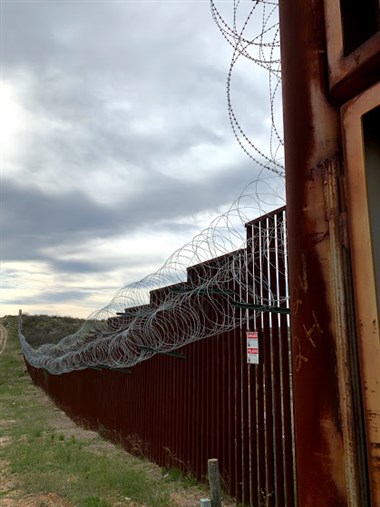 The team visited with Border Patrol, visited a medical examiners office, volunteered at immigration shelters on both sides of the border and travelled into the desert with relief organizations such as Humane Borders to see what they do to try and provide water to those crossing the border illegally.

Evelyn Erbele said they were really looking at two issues while on the border, those who come to the U.S. and turn themselves in at the border as they seek asylum and those who are crossing illegally.

The Erbeles and Kienzle said they understand Border Patrol agents have a job to do, apprehending people who cross illegally. But in conversations with agents, they didn’t get answers about where Immigration and Customs Enforcement holds people when they process them either for deportation or entry into the country.

For the Erbeles, the frustration lies at the feet of the U.S. President and other policy makers who are politicizing the border crossing for personal and political gain.

“You’re making people suffer because you want your way,” Evelyn Erbele said. “The pawns in all of this are essentially defenseless people.”

The group visited The INN Project held in the basement of First United Methodist Church in Tucson. The shelter provides emergency housing for immigrants who have been processed at the border and need temporary shelter before making their way to other destinations.

The cooperation from ICE is luke-warm, at best. Representatives from The INN Project reported that on Palm Sunday, ICE dropped off a busload of immigrants in the parking lot in front of Office Max. The INN was expecting more arrivals, but ICE agents refused to drop the busloads of individuals off at the shelter, many of who had no food or water or diapers for their children.

The Erbeles and Kienzle weren’t up close and personal with migrants on this trip, but they saw the hustle shelters on both sides of the border had to do in order to accommodate new populations of people who have traveled thousands of miles from places like Honduras and Guatemala to get to the U.S./Mexico border. 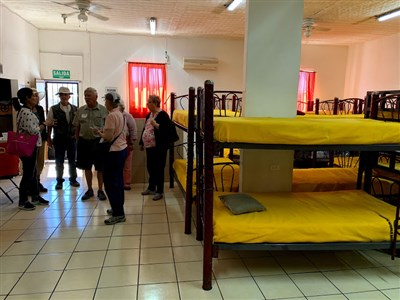 Working with Humane Borders, the group got to go refill large water barrels sitting along well-known migrant trails. Humane Borders puts a blue flag on a 30-foot pole to alert travelers of a place to rest. On each of the blue barrels is an image of the Virgin of Guadalupe, so they know this is a safe spot.

They also traveled out on smaller trails where gallon jugs of water were deposited for people who were crossing the desolate, hot desert to find some respite.

“They’ve been traveling through this country for who knows how far,” Kienzle said. “You can’t put yourself in their position. You just can’t.”

The Erbeles said Border Patrol agents and ICE are aware of some of where these water barrels and jugs are being set up, but for the most part they leave them alone.

“Many of (the agents) understand the humanity issue. It’s hard on them, too,” Teri Erbele said. “They know about Humane Borders people and aren’t threatening them at this point.”

Do these water stations and respite spots in the desert make it easier to capture immigrants crossing the border illegally? Perhaps, Evelyn Erbele said.

“At least they didn’t die in the desert,” she said.