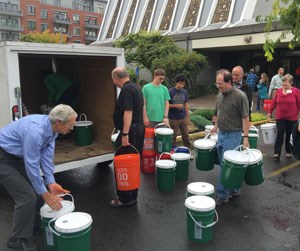 The Oregon-Idaho Conference of the Methodist Church has shown, yet again, that when the need arises, it rises to the need.  In late August of 2016, UMCOR (United Methodist Committee on Relief) sent word that it was in serious need of cleanup kits, aka ‘flood buckets’ to restock its supply depots after the recent devastating floods in Texas and Louisiana; little did they know that those very buckets would be needed in the aftermath of Hurricane Matthew.
And, with a bit of organizational help, the churches and the people of the Oregon-Idaho Conference responded with amazing generosity and enthusiasm. Over 30 churches from every corner of the conference and of every size built buckets and/or donated funds. We have delivered 400 buckets, filled with supplies, love and prayers, to the UMCOR West Depot in Salt Lake City and another 100 equivalent in cash contributions to the UMCOR Material Resources fund (#901440).
Best of all, Becky Platt, OR-ID UMVIM (United Methodist Volunteers in Mission) Coordinator, reports that she heard the most wonderful stories about how churches used this opportunity to not only build buckets for those in need but to build community and connections. Some examples: 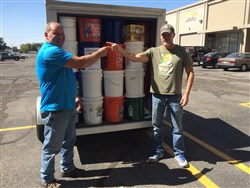 And lastly, none of this would have happened without the ongoing support of Donna Waltman, who keeps our depot connections current, and Steve Matthews, our driver (pictured on the left with Brian Diggs, at the Salt Lake City UMCOR depot).  Steve needs a fancy title to acknowledge the work he makes possible, but Becky says she just keeps calling him the “transportation angel”.  He sees firsthand the work that goes into building these kits and he gets to see the joy and excitement as the fruits of each group’s work get loaded into the back of his truck.  Becky says she figures Steve has spent more than 70 hours driving and covered over 4000 miles for this project.
See this page for more pictures.