Oregon man finds post-retirement passion on the road for UMCOR

Oregon man finds post-retirement passion on the road for UMCOR 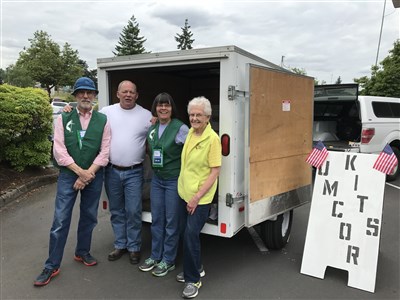 There’s no grandiose story about how Steve Matthews came to be the road warrior that he is – traveling through the deserts, mountains and coastline of the western United States – to deliver supplies and relief kits to the United Methodist Committee on Relief Salt Lake City Depot.

He’s just a retired guy from Albany, Oregon, who happened to have a truck.

After retiring seven years ago having spent time in the Marines and as a millwright, Matthews was on his own and attending Coburg United Methodist Church outside of Eugene. Perhaps sensing Matthews’ desire to find a hobby post-retirement, his pastor, now retired Rev. Gary Powell, invited him to make a trip to the Salt Lake City UMCOR Depot with a team from the church – and to bring his truck.

“He was able-bodied and retired,” Powell said. “I really saw that he had a passion for this mission trip. I never imagined that it would become a hobby/avocation/ministry of his.”

Matthews jokes that Powell “forced” him to make that first trip. But it was clear, both to Powell and Matthews, that he was hooked. Matthews said he was blown away by the generosity of the volunteers and the way UMCOR is structured so that donations go directly to the people in need – not program administrators.

He knew he wanted to do more, so he worked with Donna Waltman, Oregon-Idaho Conference UMCOR Depot liaison, and began volunteering to pick up UMCOR kits – be it hygiene, cleaning or school – at various locations across the Conference. 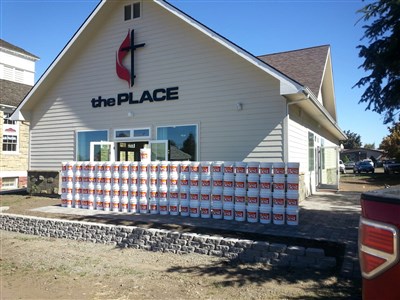 Brian Diggs, coordinator of the Salt Lake City Depot, said he and Matthews hit it off right away during his first trip and a friendship was formed. Diggs said the depot is always in need of volunteers willing to make runs to pick up supplies at various hubs throughout the west, but it was Matthews who volunteered to drive more than just the roads of Oregon and Idaho.


At first Diggs hesitantly asked Matthews if he could travel outside of Oregon, and he was more than willing. Soon Matthews was getting calls to head to Seattle, Albuquerque, Sacramento, San Diego, Phoenix and everywhere in between.

“He’s been a great help to us,” Diggs said of Matthews. “He’s the only one doing this right now (in the western region). People have really come to depend on him.”

Diggs said the UMCOR depot is hoping to find others like Matthews who have the passion for this ministry to volunteer as regional drivers, partly because he doesn’t want his friend to get burnt out on doing this work or, maybe, perhaps someday Matthews might want to take a vacation.

But Matthews passion for this work only seems to keep growing.

“The Methodists in every church I visit, they’re just amazing,” Matthews said.

In October he got called to help pick up 3,000 cleaning buckets churches had put together for flood victims. He decided it was time to upgrade his Ford F-150 and added a 14-foot trailer to his fleet in order to haul more goods to the Salt Lake City.

He loved walking into Joseph United Methodist Church recently in eastern Oregon and seeing more than 100 flood relief buckets lining the outside of the small, rural church. 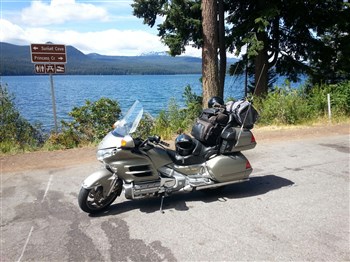 When Oak Grove UMC started putting together health kits a few years ago, Matthews miraculously stuffed 150  of their kits onto his Honda Goldwing motorcycle and drove them to Salt Lake City.

“Every compartment was full,” he said.

Though Matthews tries not to keep track of the miles, he estimates he’s put 50,000 miles on his truck this last year and he’s probably only slept in his own bed twice in the last month.

Powell said he had no idea when Matthews went on that first mission trip that he would end up doing this nearly full-time volunteer work. But he’s also not surprised.

“As a retired Marine he knows what it’s like to struggle in this world. He also has a very deep faith,” Powell said. “I think it was one of those wonderful serendipitous things.”

Matthews is in Salt Lake City this week helping UMCOR load four cargo containers full of more than 20,000 hygiene kits, 55,000 school kits and 2,000 birthing heading to South Sudan. Then he’ll head back toward Portland in time to load the 300-plus hygiene kits folks at Oak Grove plan to make on UMCOR Sunday, March 11, and get those supplies delivered.

Waltman has set up an account through the Oregon-Idaho Conference office where people can donate to help off-set some of Matthews’ travel costs. But Matthews has yet to ask for a reimbursement. In fact, he doesn’t really want credit for the work he’s doing. He said he’s just a retired guy who had the time and the financial resources to get involved (Editor’s Note: In case you were wondering this story definitely wasn’t his idea).

It’s really the churches making the kits and the volunteers who come to the UMCOR depot who deserve the credit, in his eyes.

“It’s about the people,” he said. “I thank them for all the work they do.”