Oregon voters’ guide to include Methodists’ opposition to Measure 105

Oregon voters’ guide to include Methodists’ opposition to Measure 105 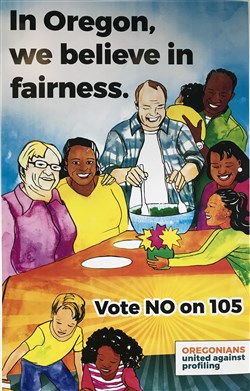 If Oregon voters didn’t know it before, come Oct. 10, all 2.6 million active, registered voters here will know where The United Methodist Church stands on the issue of immigration and creating safe sanctuaries in this state.

The Oregon-Idaho Conference of the United Methodist Church successfully gathered 800 signatures – when only 500 were required – in less than 10 days to put a statement of opposition against Oregon Measure 105 into the voters’ guide pamphlet, which will be mailed out to voters starting Oct. 10.

Oregon Measure 105 is an initiative to repeal the state’s 30-year sanctuary law for immigrants.

The pamphlet is being distributed across the state this week ahead of mail ballots and election day on Nov. 6.

“Everyone in Oregon will see that the United Methodist Church stands for something outside of our Annual Conference space in the real world,” said Natalia Olivares, immigration ministry intern for the Oregon-Idaho Conference. “I was amazed at what our Conference was capable of doing in such a short amount of time.”

According to Ballotpedia, “Oregon Measure 105 would repeal the state law, which forbids state agencies, including law enforcement, from using state resources or personnel to detect or apprehend persons whose only violation of the law is that of federal immigration law.
Measure 105 would allow any law enforcement agency to use agency funds, equipment, and personnel to detect and apprehend people whose only violation of the law is a violation of federal immigration law.”

“Over 30 years ago, the Oregon legislature took a stand against racial profiling and chose to defend the rights of immigrants. When it was passed, it was the nation’s first sanctuary law, and it is in keeping with the Christian tradition of welcoming the stranger in our midst,” said Rev. Lowell Greathouse coordinator of mission and ministry for the Oregon-Idaho Conference. “The United Methodist Church and our own annual conference have adopted a number of resolutions that support immigrant rights. Making a public statement to vote NO on Measure 105 is just an extension of our church’s principles and practices.”

Specifically, the Conference’s immigration task force worked with the peace and justice committee to draft the language that ended up in the voter’s pamphlet.

“When a foreigner resides among you in your land, do not mistreat them. The foreigner residing among you must be treated as your native-born. Love them as yourself, for you were foreigners in Egypt. I am the Lord your God. (Leviticus 19:33-34)

The United Methodist Church understands that at the center of Christian faithfulness to scripture is the call we have been given to love and welcome the sojourner. The vast majority of people now living in Oregon are the descendants of immigrants who migrated here seeking safety, security and prosperity. Regardless of status and documentation, immigrants and refugees sit in our pews and are behind the pulpits of our churches, and they have added to our witness for Christ as we have all dedicated ourselves to the church’s mission of making disciples of Jesus Christ for the transformation of the world. As disciples of Jesus Christ we are called to treat our migrant and immigrant neighbors with compassion and offer them every hospitality.”

Rev. Adam Briddell of Eugene, a member of the Conference’s immigration task force, said the team was approached by Oregon’s Interfaith Movement for Immigrant Justice (IMIrJ) about getting a statement of opposition into the voter’s guide, along with other faith communities.

“They reached out, knowing there is a whole network of United Methodists called to care,” Briddell said.

Sarah Loose, a senior lead organizer with IMIrJ, said in addition to the Oregon-Idaho Conference, the United Church of Christ, IMIrJ and Ecumenical Ministries of Oregon all gathered enough signatures to put statements opposing Measure 105 in the voters’ guide.

Read more about the Oregon-Idaho Conference’s positions on immigration reform and welcoming the stranger in our midst through the Conference 2018 journal.