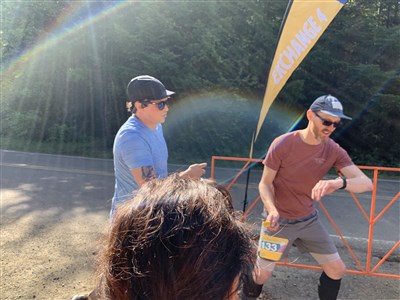 Sometimes, when pastors get together, it’s not to preach, or even talk about preaching.

Four clergy from the Columbia District and one of their spouses competed in the Hood to Coast Pacific City Race over the weekend and found themselves energized – when not exhausted – by the 78-mile experience.

Revs. Erin Martin, Josh Kingsley, Eric Conklin, and Ric Shewell, along with Martin’s spouse Charlie Collier, all stepped up to run two legs of the race on Saturday. Their team name: “May the 4th be with you.” Rev. Julia Nielsen was also expected to participate but had to bow out at the last minute for health reasons.

Pacific City race is a shortened version of the larger Hood to Coast relay, which will happen later this summer. It starts at Bald Peak Scenic View Point outside of Hillsboro and winds it way to Pacific City.

But it was still brutal, at least according to Shewell.

His second leg later in the day was approximately 7 miles. 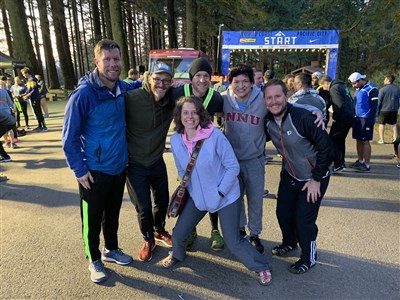 Shewell found training for this race to be therapeutic. The pastor of Christ United Methodist Church Cedar Mill had a treacherous winter with his 6-year-old daughter undergoing brain surgery after a cluster of deformed veins in her brain ruptured. The family was in the hospital for quite some time, but Shewell said getting out and training for this race helped provide him with some healing.

Collier said he and Martin have both run their fair share of marathons and half marathons. They did the big Hood to Coast relay 12 years ago.

“However, we’re slower and older and our lives are fuller now,” he said. “It was fantastic. It was great to run with some of Erin’s colleagues.”

Martin said it was about proving to herself at 47 that she could still muster up the energy to go the distance.

“I actually really need to do this,” she said.