Pendleton United Methodist Church began in 1870 with the first service conducted by circuit rider Rev. H.B. Lane to six people on a sawdust floor in the town’s original courthouse. Later the congregation which now numbered 110 members and 160 children in church school, moved from its second building in order to move away from the brewery that built next door. They built the impressive gothic stone building  which was dedicated in June 1907 with its famed stained glass windows and a modern sloping sanctuary, as in a movie theater, that could seat hundreds.  This was the congregation’s home until it was sold in 2019.
Many pastors followed that early circuit rider Rev. Lane. Rev. Wendy Woodworth was the pastor of Pendleton UMC at their 125-year anniversary.
Patty Nance was the lay assigned pastor for the last two years of Pendleton UMC's ministry, 2019-2021 as they met in the City Hall.

Before the original church building was sold, the church bell was donated to Hermiston UMC. Nance is the lay assigned pastor at Hermiston as well as Pendleton, and said they plan to restore the bell in honor of the Pendleton church.

Nance said the church was always known for being socially conscious and for loving to feed people.  Every Sunday morning the congregation served breakfast to all who wanted to attend, including a large homeless population in more recent years. She said they were also known for their large church dinners with their close-knit community with great fellowship.
Nance and her husband, a life-long rancher, recently sold their cattle ranch and moved to Weston Mountain. They have a grand-daughter who is  a rodeo barrel racer. She said they fit into what most people think of when they think of Pendleton and the world famous Pendleton Round-Up.

“But” she said, “Pendleton UMC is more than that, a community of believers, a community of just amazing Christians who were there every single day of the year, every day, since 1870. They were feeding the hungry, they were providing clothes they just did so many different things over the many, many years at their church.”

Closing a church can be hard emotionally for the remaining members and during her tenure as pastor, Nance welcomed members an hour before Sunday worship to have the chance to come and share their feelings of sadness, frustration or anger and fond memories that stretch back over generations.

She said, “ I was never so thankful as I was for a woman named Gwen Drake (retired District Superintendent) who cajoled me into taking coaching classes, because my job was to walk alongside them (the congregation) for them to determine.what they wanted to do and what that was going to look like. And they did a great job. They are warriors.”

Nance is planning a tea at her home for the members to go through scrapbooks and share memories to give them “a proper closing” in honor of them and their faithfulness. People who grew up in the church will be asked to share their treasured family memories.

Pendleton UMC will be remembered as one of the first churches and a faithful church through Pendleton’s history. 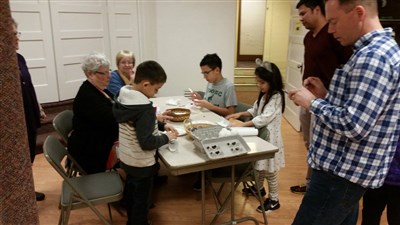