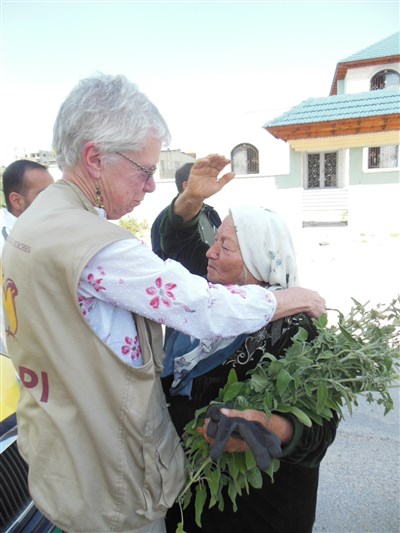 “Sometimes the soldiers came and let the people with permits cross; sometimes they didn't.  And sometimes, even with a permit, farmers were arbitrarily denied access to their land.  She just wanted me to hear her story - and to share it,” she said.

Poujade was a human rights observer volunteering with the Ecumenical Accompaniment Programme in Palestine and Israel (EAPPI) in 2013, a program that is currently in need of more human rights observers.
Poujade said at the time she was there, few Americans were participating in this program because of the high cost and lack of financial support.  Church World Service oversees the U.S. but has no budget for it beyond the minimum for salary of a part-time coordinator. However, times have changed, and she recently learned the US EAPPI program now has funding, at least for the near term. While attending a recent EAPPI Advocacy Summit in Washington, D.C., she learned how valued observers are and how much US perspective and participation is needed in this program – especially with President Trump’s recent actions to move the US Embassy to Jerusalem, stop U.S. funding of the United Nations Relief and Work Agency and other relief programs for those in Palestine and Gaza and others.

She first heard about the program and has been interested in the Palestinian/Israeli conflict since she did a study trip with the UMC General Board of Global Missions in 2008. In 2012, she met a woman who had just returned from serving with EAPPI.

“I was retired, looking for a way to serve – I considered the PeaceCorps but didn’t want to be away from my young grandchildren for two years – and EAPPI struck me as something I could do,” Poujade said.

Since a teenager who observed the injustices of the Civil Rights movement in the 1960s to the Vietnam War as a young adult, Poujade said she’s considered herself be a justice seeker. She grew up on the Exodus story “a land for people with no land.”

“I believed it without question until I heard a presentation by retired UM Missionary Sandy Olewine, who had been serving in the Holy Land, and who shared the reality of the place and the situation,” she said. “That led to lots of reading and study, and to eventually applying to participate in the GBGM study trip.”

The trip in 2008 inspired her to come home and do what she could on a local level, meeting a number of people in the Portland area from different religious and cultural backgrounds who were working on the issue.

“EAPPI seemed like the next logical step in this process of working for justice – especially in a place where too few people even realize the extent of that injustice,” she said. “(I learned) I'm stronger than I'd thought possible, one person can make a difference, and people are more alike than they are different.”

Poujade said the basic requirements to serve with EAPPI is to be between the ages between 25 and 70, a willingness to spend three months in a West Bank placement, and a thirst for justice. For more information visit https://eappi.us/.