Portsmouth Union gets to work on affordable housing project

Portsmouth Union gets to work on affordable housing project 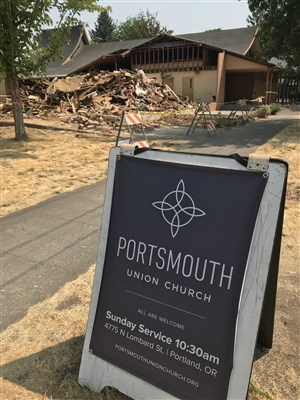 Portsmouth Union Church in the north Portland neighborhood looks right now – from the outside – like it’s in chaos.

Last week, rubble from one-third of the building was strewn across the west side of the lot, there was some issue with the water, and two outhouses are now sitting on the east side parking lot.

While it may look a mess, things are very much on the move for this church which has combined two separate denominations into one church family while also readying itself to tackle Portland’s affordable-housing crisis.

“This work is rooted in the Jesus story,” said Rev. Andy Goebel.

The church wouldn’t be at the point it is – poised to build a 20-unit, multi-family, affordable apartment complex on its property – without understanding how much has changed at the church in the last few years.

Nielsen, a Deacon in the United Methodist Church, was assigned to University Park UMC in 2014, knowing that it was a congregation in decline, but had the potential to find a new path for ministry in the surrounding community.

There were 20 people attending the church and 12 started coming to a bible study and planning session Nielsen started hosting with the question to the congregation of “How do we want to live?”

“They were willing to do everything, including rip the building down,” Nielsen said.

Nielsen, with a background in community organizing, said the conversation drifted toward affordable housing. A lot of homeless people would camp on the church property and the church is one of the only warming shelters on the peninsula between the Columbia and Willamette rivers.

At the same time these conversations were happening, Goebel and his St. Johns Community Church was looking for a home. The church plant within the Evangelical Covenant Church denomination lost use of its old building in February 2015 – months after University Park was in discussion about affordable housing.

“They had made this decision and I come and spill my guts about our church and where we needed to be,” Goebel said.

It was a heart-breaking time for the St. Johns congregation, but Goebel said they were fortunate to find sanctuary with their United Methodist friends.

The two churches began worshipping together through the Lenten season. It turned out St. Johns had some experience working with the homeless population and its congregants were eager to get involved in the discussions about affordable housing with University Park.

During Lent, these two different denominations discerned how they would share the space, when, to Nielsen and Goebel’s delight their congregational leadership told them they were going to become one church, working together on many issues, including the need for affordable housing.

“We had work to do together, and we knew that,” Goebel said.

The newly combined congregation decided to move forward with an affordable housing project, but it required some outside support.
Because of state and federal housing guidelines, regulations and restrictions, it would have been difficult for the church to go through this process by applying for federal and state funds for such a project. They are working with Rob Justus of Home First Development on these plans. 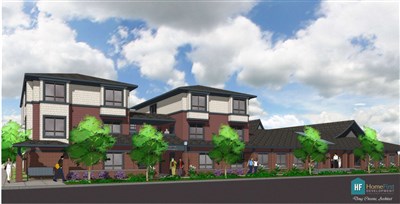 The congregation proceeded by using funding from the sale of the parsonage, people in the congregation stepping up, along with Beneficial Bank providing $1.8 million in debt service. The total cost of the project is estimated at $2.6 million, but could increase if the project continues to be delayed and the cost of building materials continue to increase.

Goebel said he knows of a few congregations who have developed affordable housing complexes as a way to create additional revenue for their church.

Nielsen said the goal is to make enough money to pay back the debt and provide for some of the maintenance of the building – that’s it.

But they’ve still got some time before they can start thinking about renting apartments.

In order to make room for the apartments the church had to get rid of 2,000 square feet of its building, which included the fellowship hall, bathrooms and a nursery. 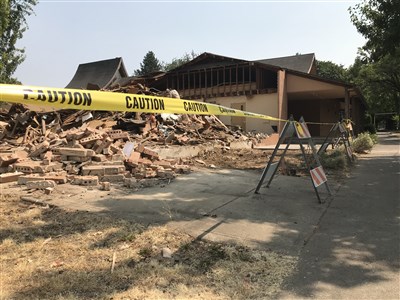 Nielsen said it’s a multi-step process and can take some time, so they don’t yet have a firm date on when they can start accepting renters.
It has, at times, seemed quite daunting and overwhelming. But she just looks to the congregation.

“They’re very spiritually mature,” she said. “They’re just strong about it. When you come out of this all of your people are more spiritually strong. You can’t help it.”

It’s been a learning process and frustrating at times, but Goebel said they’d like to work with officials on streamlining the process for churches and other non-profits who are committed to solving Portland’s housing crisis.

To that end, Portsmouth Union will be hosting a housing summit on Oct. 13. More details on the event are forthcoming.

“This is the first of what we hope is more churches going through this process,” he said. “The number of delays is God’s wonderful sense of humor, because she’s funny like that.”