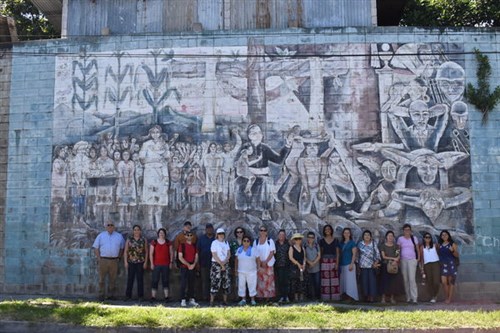 As her son quietly strummed on his guitar in the background, Candelaria García shared about the admiration she had for the four church women, US Catholic Missioners, who were killed in 1980. Just outside doors of the tin-roofed chapel, which was erected on the outskirts of Santiago Nonualco, a poor rural community in El Salvador, four US Catholic missioners were killed after having unimaginable things done to them. I say unimaginable, but that’s not really true.

I was one of 18 United Methodists from around the US who participated in the General Board of Church and Society’s “More to Migration” seminar. We spent a week in El Salvador meeting people who were doing incredible things despite less than desirable conditions. Our goal was to listen and to learn from El Salvadorans so that we might gain a different perspective on the immigration/migration crisis here in the US.

Being a history and political nerd, I knew, academically, the issues facing El Salvador and the impacts of US foreign policy on the country. In talking to El Salvadorans, it put a face on what was an academic or abstract issue. Hearing their stories allowed us not only to hear a new perspective, but they also moved us to a deeper level of understanding.

With each group of remarkable people we met we were confronted with the juxtaposition of such hope and new life among the extreme poverty and violence plaguing the country. It’s as if God were saying, “you may see death, but I am yet alive.” God lives in the people of El Salvador.

As The United Methodist delegation sat in uncomfortable wooden pews, we listened to Candelaria recount her time with the four U.S. Catholic missioners and the political climate under which they lived more than 40 years ago and still today.

She told us about how she had to bury her bible in the ground so that she would not be caught with it and tortured by the US trained death squads. Then she got quiet and shared about a time when she was late to a church meeting with the four US catholic missioners.

There was cake to be served at the meeting. Candelaria told us that she was running late as she often does and missed out on the cake. However, when she arrived, Dorothy Kazel, a lay missioner from Ohio, saved a piece of cake for her. Candelaria told us that this may not seem like a big deal, but in a country where as a poor woman, she was often forgotten about, someone remembered that she was supposed to be there and saved a piece of cake for her as if she were a member of her own family.

As we sat there, in the midst of Candelaria’s grief and gratitude, we were sitting at the feet of Jesus. She could have chosen to be bitter and complain or gripe about the violence and persecution, but no, instead she shared stories about a church-lady from Ohio who shared a piece of chocolate cake with her – a modern day parable of sorts. 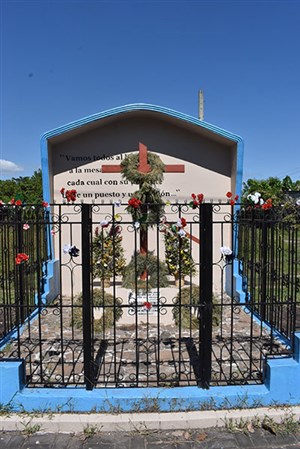 It’s not difficult to tie the US foreign policy of the 80s to much of the country’s problems today. The mass poverty, gang violence, and environmental degradation can all be attributed to US intervention in the country.  In the 1980s El Salvador fought a brutal civil war pitting the wealthy and elite against the poor and marginalized who were branded as communists because they wanted basic social reform. You can guess which side the US was on. For 15 years the US government sent $1 million a day of arms to El Salvador to be used against the poor and anyone perceived to be a liberationist. That’s nearly $5.5 billion of death delivered by the US.

One of the more touching moments of the week was visiting Patronato Lidia Coggiola, a school in the town of Zaragoza. This town is controlled by the MS-13 gang. Children here grow up witnessing horrific violence and poverty, yet behind the razor wire and gates there are 50 happy children learning in a holistic environment. The younger students performed a puppet show and sang for us. Children at this school learn, in addition to the basics, environmental stewardship.

The liberation of the poor and marginalized was a common thread on our journey. We stopped at site where Fr. Rutilio Grande was assassinated by the US backed government on his way to celebrate mass. It is often thought that the death of Fr. Grande was a conversion point for Oscar Romero, moving him to embrace a liberationist approach to theology. In the coming years Romero would preach liberation which often put him at odds with both the El Salvadoran government and the US government who saw him as a threat to the right-wing extremists. Romero and his followers were branded as communists and targeted by the US trained El Salvadoran security forces, or “death squads.”

As our group listened it became clear that no one really wants to leave the country. There is no mass desire to come to the US and achieve the American Dream. They want nothing to do with it.

I am reminded of the final stanza in the poem "Home" by Warsan Shire:


no one leaves home until home is a sweaty voice in your ear
saying —
leave,
run away from me now
i don't know what i’ve become
but i know that anywhere
is safer than here

As our local churches engage with immigrants and migrants it would do us some good to learn the history. Providing hospitality and mercy are wonderful things, but creating real systemic change requires us to acknowledge our own complicity in the evil committed against these children of God. Only then can we begin the work of liberation.