Reflections from the Border: Report from recent UMVIM trip

Reflections from the Border: Report from recent UMVIM trip 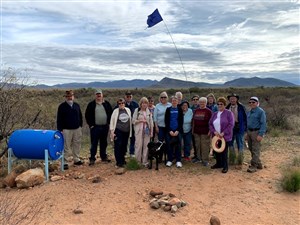 Early in March, a team of 15 traveled to Tucson. This team included friends and new friends from Oregon and Tennessee. We spent a very busy 5-days learning about the real issues at the border, both in Tucson and Nogales.

I’ve been home for almost two-weeks now, but visions of what our team saw and words that we heard still resonate.

One meeting early in the week was with Rocio, a woman from Bolivia who spent 2 years and 1-month in the Eloy Detention Center. Her story is heartbreaking and very difficult to comprehend, but brought her to this time of hope and healing. She is now here legally with a T-VISA and is the program coordinator for the Casa Mariposa Detention Visitation Program.

We had a presentation from the Border Patrol and sat in court during Operation Streamline watching groups of up to 60 individuals, men and women, walk into the courtroom in shackles. People from Mexico, El Salvador, Honduras, Guatemala, Ecuador. They were called up to the bench in smaller groups (2-8); some given translation head-sets so they could understand what the judge said. The judge asked a couple questions: “I want to make sure this is what you want to do.” Most had already agreed to a plea and given up their right to appeal, often unknowingly. The judge gave a sentence: if this was the first illegal entry, the sentence was usually time served and deportation. If they had been caught previous times, the sentence could be 30 days to 2-years and deportation. The judge then said: “Dismissed. I hope you have no more troubles.”

We visited The Inn at Tucson UMC, a family shelter for asylum seekers. ICE brings them here after being held in custody; they are greeted with: ‘Welcome. This is a church and you’re safe here.’  We also learned about the work of Arizona Justice for Our Neighbors (AZJFON), providing free or low-cost immigration legal services for low-income immigrants, refugees, and asylum-seekers.

One day was spent in Nogales, Sonora, Mexico with Border Community Alliance visiting NGO’s and a migrant shelter that has been open for 38 years. San Juan Basco, a youth center supported by the Salesian Order of the Catholic Church has been vital in offering education, sports and positive values to children that only get ½ day of school. Our guide stressed the idea of social investment rather than charity.

Another day we experienced the desert through Humane Borders and Tucson Samaritans. Both provide water for migrants through water stations. These water stations are placed in high-traffic areas; migrant trails. Along the way, we stopped at a group of crosses identifying sites that human remains were found. Just the opportunity to see the harshness of the landscape was striking. “Our primary mission is to save desperate people from a horrible death by dehydration and exposure and to create a just and humane environment in the borderlands.” Humane Borders

Updates since we have arrived home:

There is so much more to tell. Members of the team are ready to share stories and perceptions of their time at the border. Please watch for ways you can learn more through The Connector, at OR-ID MFSA and at OR-ID Missions.