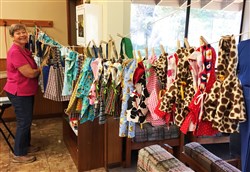 By Dee Poujade
Sixteen women from the Oregon-Idaho Annual Conference spent a glorious fall weekend at Camp Magruder sewing school bags and layette items for the United Methodist Committee on Relief (UMCOR) Depot in Salt Lake City (UMCOR West).  It was the Conference’s second annual “Kit Kamp,” so named because the items made will find their way into some of the Depot’s seven “kits” that are used in disaster relief situations worldwide.

During the Thursday-Sunday event, the sewers made 130 school bags (which will be filled with paper, pencils, crayons and other supplies needed by school children).  They also made 32 baby jackets, 19 baby gowns and 21 diapers, which will go into layette kits for worldwide distribution.  Other “kits” distributed by UMCOR include sewing kits, health kits, birthing kits, bedding kits and flood buckets.

The sewers took time away from their sewing machines for a Skype call with Rev. Brian Diggs, director of UMCOR West, where they learned that recent shipments had gone from Utah, and from its sister facility in Baldwin, Louisiana, to Syria, Lebanon and Jordan, as well as other locations across the globe.  They also met Steve Matthews, who drove from Cottage Grove to pick up the finished items.  Steve’s “mission” is to collect UMCOR donations across the conference and deliver them to Salt Lake City, which he does on a regular basis.

And, taking advantage of the beautiful autumn weather on the coast, some of the sewers took breaks for such activities as beach walks, and walking the Magruder labyrinth.  They also enjoyed good meals in the Magruder dining room and an impromptu concert by the Hillsboro High School choir, which was holding its retreat in conjunction with Kit Kamp.

The third annual Kit Kamp will be October 26-29, 2017. Check gocamping.org for more details early next year.