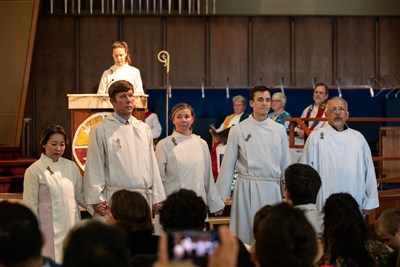 The six candidates for ordination and commissioning in the Oregon-Idaho Conference did not walk into Friday night’s worship service as individuals.

Instead, this tight-knit group of clergy candidates have been meeting via Zoom calls and in person since February’s Special Called General Conference to discern their path, even as they answered the historic questions of faith and promised to uphold the Book of Discipline.

“Initially, right after General Conference, I was questioning everything,” said Eric Conklin.

Conklin was ordained as a deacon and Anna Cho as an elder in full connection, while Nicole Berry, Taylor Gould, Scott Ostlund and Jorge Rodriguez Vasquez were commissioned as provisional elders.

The group drafted a letter to the Annual Conference, which Gould read part of before prayers were issued and hands were laid on them.
The group said they disapproved of the harmful actions caused by the 2019 Special Called General Conference, specifically to LGBTQ+ individuals who are also children of God.

Gould said the six candidates feel compelled to uphold their baptismal covenant to resist evil, injustice and oppression wherever they may find it.

Gould, 26, is an openly queer woman who understands the momentous occasion under which she is being allowed to serve the church, even though the greater United Methodists Church sees her as unfit to lead after passing the Traditional Plan in February.

But the truth is that the Oregon-Idaho Conferences has been ordaining and commissioning LGBTQ+ persons for years and the Board of Ordained Ministry issued a statement this spring that a person’s gender and sexual orientation would not be a factor in determine their efficacy to serve the local church and will also work to provide safe harbor for those in other areas of the country who are risking persecution from the church because of their identity.

“There is such a deep privilege here,” Gould said.

Collectively, the group is choosing to stay and resist the Traditional Plan; hoping and working for the day when something new in the church can be created.

As Friday’s ordination came to a close, Bishop Elaine Stanovsky looked out on the crowd and the new group of clergy leaders and smiled.

“You know what? The kids are all right,” she said. “And the church is going to be OK.”