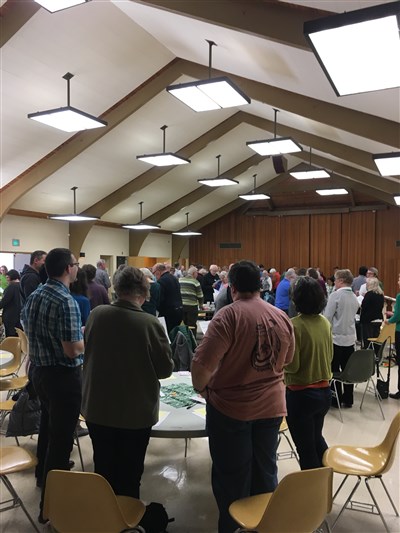 Those were a few of the emotions expressed as Table Talks 3.0 got underway in Portland and Eugene this weekend. The gathering gave people the chance to worship together, learn more about why the One Church Plan failed at General Conference, and ask more questions about where the church is headed.

“It was good to be together again,” said Columbia District Superintendent Erin Martin. “It was obviously a different place to be.”

The Table Talks began last spring with churches all across the Greater Northwest Episcopal Area hosting discussions about what the Council of Bishops was recommending for the special called General Conference based on the Commission on a Way Forward’s recommendation. The talks continued at Annual Conference in Boise – version 2.0 – where discussions were held on how church members find commonality even in their differences and disagreements.

This third round of talks is focused on the aftermath of the special-called General Conference, where the Traditional Plan was adopted along with calls for a doubling-down on the exclusion of LGBTQ+ individuals within the full life of the church and punishments for clergy.

“There is definitely a lack of neutrality,” said Martin, who facilitated the Portland discussion. “People have strong opinions and there is an overwhelming sense of urgency.”

On Monday – the day after these Table Talks – a statement was issued by the Western Jurisdiction leadership team that churches in this geographic area of The United Methodist Church are moving forward toward creating a “home for all” that United Methodist must continue to resist injustice in all its forms and grounded in Wesleyan heritage, will foster a new movement of inclusive United Methodists.

Kathleen Cosgrove of Vancouver attended the Portland FUMC conversation and said she also felt a sense of unity, but people remain concerned about the pace at which this resistance of injustice and fostering of a new movement will happen.

“There are some people looking for more definitive direction,” she said. “Some people might be looking for something more concrete.”
And just like the last year’s Table Talks, the goal is for each conversation to be centered in worship, according to Rev. Lowell Greathouse, mission and ministry coordinator for the Oregon-Idaho Conference.

How each Table Talk is designed depends on each district and church, but the one common thread at each one of these discussions will be giving people the opportunity to answer the question “What do you need to say to the church?”

Half sheets of paper were handed out in Portland and Eugene with this question. In Eugene, there was also a follow-up question: “What do you need to say to the world?”

Martin said from the Portland gathering more than 120 people lamented about the state of the church, expressed concern that the church should move on and hope and impatience for a more inclusive denomination to emerge.

“It’s important so we can listen for the swell of the spirit,” Martin said. “This is the opportunity to be listening and say, ‘each of your voices matter.' It’s a guarantee their responses will be heard.”

People are allowed to answer the questions anonymously, but they are being collected by district superintendents and will be reviewed by Conference leaders to get a sense of where people’s hearts lie.

Cosgrove hopes laity also gets to review the responses.

“It would be good if that were reported back,” she said.

These were the first Table Talk 3.0 sessions for the Oregon-Idaho Conference, but the events are happening throughout the Greater Northwest Area and began March 10 with a session in Bothell, WA. Over 30 sessions have been scheduled in the Pacific Northwest, Alaska, and Oregon-Idaho Conferences. Visit the Greater NW Area website to find a talk in your neighborhood or organize one in your local community.

Table Talks 4.0 during the June 2019 Annual Conference Session in Eugene, OR will be the next step in the conversation about the future of the Church.