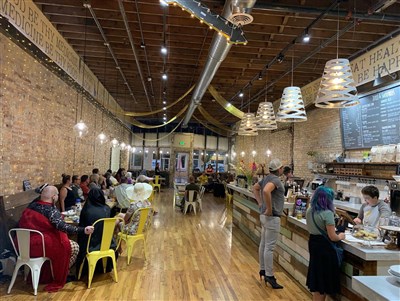 In Twin Falls, there’s a growing pocket of progressives who are working to be more loving and more inclusive and Twin Falls United Methodist Church has been doing its part to support these conversations.

“There were periods of times where people had serious questions in the middle of a drag show,” Webb-Mitchell said. “This was easier than doing it in a church.”

“In that environment, the idea started percolating about doing an event,” Gharring said.

Chris Smith is one of the parishioners at Twin Falls UMC who performs as drag queen Chaise Manhattan. He’s been performing as Chaise for 30 years, but only recently moved home to Twin Falls with his husband and started attending the church.

“For us, this is the most progressive church in town,” Smith said. “This is the first church that felt like home; like family.”

Smith was eager to get his fellow queens involved in a show that also centered on discussion about faith.

“There were really tough questions,” he said. “But we had to joke a little bit.”

Gharring said they could have held some sort of event in the church, with church people attending, but it wouldn’t have been as effective.

At the Yellow Brick Café, there was a mixture of church members, community members and people who were just eating dinner who joined the festivities.

“It was a way to bring the conversation about LGBTQ+ including and faith into the community,” Gharring said. “The panel discussion was really deep and moving.”