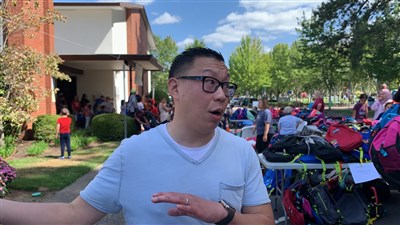 In a year since its inception, the WakeUp Beaverton event hosted by First United Methodist Church has more than doubled the number of immigrant and refugee families it serves.

As people chatted in Korean, Mandarin, English, Spanish waiting to pick up a backpack for their child or lining up to get food from the church’s monthly free food market or sought information on affordable housing options in Beaverton, local pastor Jefferson Chao took in the chaos with a smile.

“I never pictured it to be this big,” he said.

Last year, in his new appointment to Beaverton First UMC, Chao said he had three weeks to put together a back-to-school program. With assistance from the city, the congregation and other community partners, the church gave away 200 backpacks and started its monthly food market giveaway.

The church has given away more than 48,000 pounds of food this past year and last week handed out 400 backpacks filled with school supplies to kids in need.

Chao came to Beaverton First UMC a year ago in a part-time role to help revitalize the small congregation and get the church more engaged with the local community. He literally took to the streets to see what the needs were.

“I don’t know the streets here, but I just walked and walked,” he said.

He learned there is a large immigrant and refugee population in Beaverton. Many are living 10 people to a home and kids are sleeping on the floor.

He worked with the City of Beaverton as well as the school district and other community partners to bring this all to the attention of the church. 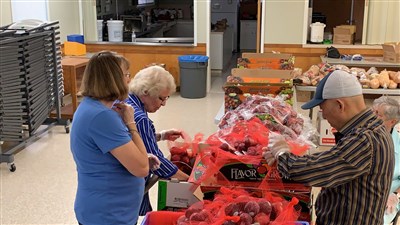 This year the city gave the church a $2,500 grant, with partners like Costco, State Farm Insurance and many members of the congregation also contributing.

“It’s opened (the congregation’s) eyes a lot,” Chao said. “I think we’ve built a huge rapport with the community.”

Beaverton First member Edie Flaming was helping hand out backpacks last week. Kids got to pick out whatever colored backpack they wanted based on their age range. It was almost 2:30 in the afternoon and she’d been there since 8 a.m. But she wasn’t complaining.

“I think it’s a great project,” she said. “We’re a small congregation, but it’s been fun.”

With support from the Greater Northwest Innovation Vitality Team, Chao is now the full-time pastor serving the church. WakeUp Beaverton hasn’t been easy, but Chao said it’s the kind of work others can replicate in their communities because it’s a labor of love.

“It’s more about building trust with your congregation,” he said. “You’ve just got to be motivated.”