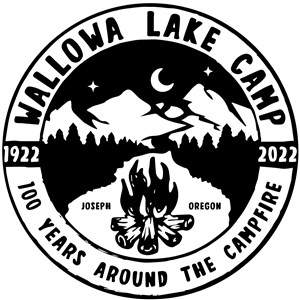 Wallowa Lake Camp is celebrating 100 years of camping ministry—100 years around the campfire with a special celebration scheduled August 19 and 20th.

The camp is in the Wallowa Valley on the ancestral home of Chief Joseph and the Wallowa band of Niimiipuu (Nez Perce) people.

Everyone is invited to attend. The celebration will begin on Friday night with a benefit Concert with Heidi Muller and Bob Webb, both veteran performers. The concert starts at 7 p.m. in front of Bailey Lodge. Donations will be accepted to help build the camp’s new Program Center. On Saturday (Aug. 20) come for a “free day of fun at camp” beginning at 1 p.m.

In the early 1920s when eastern Oregon was part of the Idaho Conference, a group of Methodist ministers leased the land in the area of the current camp in order to hold the first Wallowa Lake Epworth League Institute. The accommodations were very primitive but the Institute was considered a great success. Within the next two years the Epworth League organizers raised $1,800 and negotiated the purchase of the 110 acres for a permanent camp site.

Over the next few years, land was sold and lots were leased to individuals and churches which financed the installation of a water system and the building of a bridge across the river. A circus tent with benches served for program space. Outdoor cooking, and sleeping under the stars were the norm. Many church groups from western Idaho and northeast Oregon built small cabins for cooking and dining and other churches built larger cabins to include bunks. By 1932, the first Assembly Hall was built, complete with a sawdust floor. The corporation of ministers turned over the camp holdings, including the leases to the Epworth Leagues of the Western District of the Idaho Conference and it officially became the Methodist Camp Ground Association. In 1952, the campground association was transferred to the Idaho Conference.

The camp was managed for many years by local Methodist pastors in succession. Help with improvement projects was recruited from local churches, as well as, help with programming. In 1957, timber from the property was harvested and sold to raise funds for the construction of the Lesley Bailey Lodge which was dedicated in 1959. It boasted a commercial style kitchen and dining/program space. Many other improvement projects (shower houses, bunk houses, water and septic) were undertaken and the camp flourished.

Eventually, the management of the camp was no longer the responsibility of local pastors. The Oregon and Idaho Conferences were joined and the Conference Camp and Retreat Ministries board oversaw programming and worked with the volunteer Camp Site Team which monitored the property needs and maintenance. Summer managers were hired to oversee the day-to-day camp needs for the summer camping season.

The future of the camp came into question in the early 1990s as facilities aged and income lagged. A substantial effort to “re-imagine” the future of Wallowa Lake Camp took place. The vision and dedication of professional staff along with the energy and labor of a great number of volunteers and supporters has transformed this camp over the past 20-plus years. Wallowa Lake United Methodist Camp has become a wonderful destination for families and adults who are gathering for a program camp, a family reunion, a church retreat or simply looking for a tranquil place apart from the pressures of the outside world. The ministry of Wallowa Lake Camp into the future is to continue to create sacred space for Christian hospitality and learning.

Find more information about the August 19 and 20th events here or contact Peggy Lovegren, camp director, at wallowalakecamp@gmail.com or call 541- 432-1271.