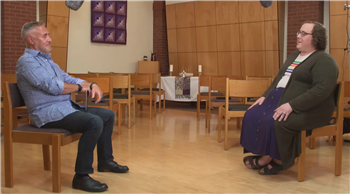 “Brett has expanded our advocacy with LGBTQ+ siblings in the life of the Oregon-Idaho Conference and beyond,” said Bishop Elaine JW Stanovsky. “He has led us forward on a path to becoming a more loving, more inclusive, more just church. We cannot and won’t stop working toward the goal of being a place where love lives and we know Brett will continue his ministry of understanding, inclusion, and advocacy.”

The Oregon-Idaho Conference has a long history of LGBTQ+ advocacy, becoming a reconciling conference and member of the Reconciling Ministries Network in 1996. The Conference was able to hire Webb-Mitchell, an ordained openly gay clergy in the Presbyterian Church USA, part-time in February 2018 with a one-year grant from the Collins Foundation.

The grant was extended for two more years and Webb-Mitchell successfully helped to grow the network of reconciling congregations in the Oregon-Idaho Conference, established a popular blog, and regularly preached in pulpits in Oregon-Idaho and the Pacific Northwest Conferences.

The pinnacle of Webb-Mitchell’s work came this winter with the release of the documentary “Called to Love One Another” telling the story of different individuals’ journeys to love and acceptance within the life of the church. 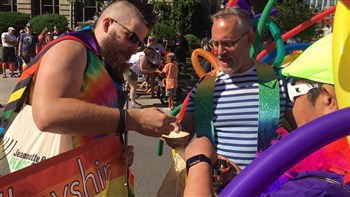 While the release of the documentary has received notable attention, Webb-Mitchell’s work extended well beyond the documentary production. He established an LGBTQ+ advocacy committee in the Oregon-Idaho Conference and, after Annual Conference ended in Boise in June 2018, he led conference participants, including the bishop, walking in the Boise Pride Parade along with other United Methodists, offering communion along the parade route.

Webb-Mitchell helped organize the international Love Your Neighbor Coalition gathering in Portland in the fall of 2018. After a special 2019 General Conference reaffirmed “traditional” anti-LGBTQ+ inclusion provisions, Webb-Mitchell visited churches from Twin Falls, Idaho, to Milton-Freewater, Oregon, and many places in between helping faith communities grow in their understanding and acceptance of LGBTQ+ people in the life of the church.

He was also instrumental in coordinating a Western Jurisdiction UMC queer youth camp in California in 2019 and was coordinating an LGBTQ+ clergy and laity retreat at Suttle Lake Camp in Oregon before the pandemic hit.  It later became a virtual gathering.

“Our Conference is stronger, and people are more engaged, because of Brett’s work,” said Laurie Day, director of connectional ministries in the Oregon-Idaho Conference. “We will continue to make LGBTQ+ advocacy a priority of this Conference and are seeking various avenues to expand upon the significant impact Brett has made.”

Please share your well wishes for Brett on this Kudo Board.