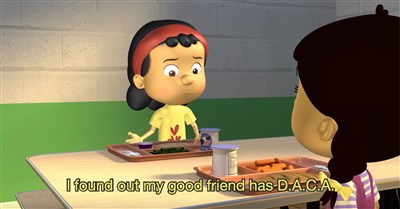 At just 13 years old, Sherlyn Rueda is doing her part to help her friends and classmates understand immigration issues.

After her school in Wilder, Idaho, started an animation class, with urging from school officials, she got to work creating a short, child-friendly animated video to explain the Deferred Action for Childhood Arrivals (DACA), which supports children who were brought to the U.S. illegally.
Sherlyn and her siblings are all DACA recipients.

“I wanted to help little kids of families going through the same situation and let them know it’s going to be OK,” said Sherlyn, who is a member of the Ministerio Metodista Amistad y Fe (formerly known as Wilder Hispanic Ministries).

Sherlyn, who just started eighth grade, said the mechanics of creating an animated video wasn’t difficult. That’s just takes some computer programming and coding skills that she’s already been learning. The tough part, she said, was writing the script, roping in a few friends and helping voice the characters in the video.

The video starts with Vania telling her friend Brandi she’s sad her friend has DACA, while Brandi said she doesn’t know what DACA means.

“Do you think my friend will have to leave?” Vania says.

The two characters learn what DACA stands for and how to write to Congress to tell them to renew DACA.

“We are all trying to be good people,” Brandi says. “And if we all work together, we can accomplish anything.”

Sherlyn said there are several children of immigrant families who live in Wilder and many of her fellow classmates are DACA recipients. The possibility of DACA going away is real as President Trump’s administration has vowed to not allow for renewals but is still being decided in the courts.

It’s top of mind and awareness for a lot of 13-year-olds, and younger, in Wilder, she said.

It’s top of mind in her family, too. Her older sister Yuni Rueda has been an outspoken advocate for DACA and recently received the Bishop’s Award for her advocacy from Oregon-Idaho Conference Bishop Elaine Stanovsky.

“Thank God nothing bad has happened yet,” Sherlyn said.